The Wagler's pit viper lives in trees of the Southeast Asian rainforest. The climate in the rainforest is wet and humid and it rains a lot. During the wet season, or monsoon season, it usually rains every day. The rainforest temperature during the day varies very little and is about 96° Fahrenheit. The nights are cooler than the day time, with temperatures averaging about 75° Fahrenheit. During the dry season, which is from March to May, it doesn't rain quite as often as the monsoon season, but is not completely dry. Wagler's pit vipers like the humidity to be around 90 %.

Wagler's pit viper is a medium sized viper which can grow up to 4 feet in length. It is called a pit viper because they have pits just behind the nostrils which contain special organs that can sense heat and locate warm-blooded animals. This is an important adaptation since Wagler's pit viper is nocturnal and hunts at night.

It is an arboreal species, which means it lives in trees. The adult male is green, with a black border and many greenish-yellow crossbars on its back. The young viper changes its color as it grows. The young are all green with spots of white and red. The spots are sometimes arranged in pale crossbars.

The adult female goes through four different phases named: The Malaysian phase, the Sulawesi phase, the Kalimantan, and the Philippine phase. During these phases, the snakes are a wide variety of colors and sizes. For example: most pit vipers can grow to be larger than 40". But in the Philippine phase the snake is smaller and usually doesn't grow any bigger than 20". In the Malaysian phase, the snake has a black background with yellow bars across it's back, a yellow belly and green spots, one on each scale. In the Sulawesi phase, the viper has a green background with blue bars and white across the back and a cream and blue belly. It also has a blue stripe from the nostril through the eye. In the Kalimantan phase, the snake has a yellow background with bright blue bars across the back. Its belly is shades of green and cream. The last phase is called the Philippine phase. In that phase, the pit viper stays the same coloring as when they are young, but they remain a smaller size. 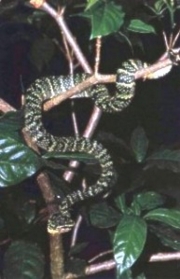 Pit vipers are viviparous, which means their babies are born live (no eggs). The eggs open inside the mother's body. One of the advantages of this is that the eggs are better protected than eggs that are hatched on the ground. The number of snakes born in a litter ranges from 6 to 50. All babies are able to look after themselves as soon as they are born. Venomous snakes have fangs already loaded with venom and poison as soon as they are born.

The Wagler's pit viper is a carnivore. That means that they eat other animals. They hunt at night. The adult feeds on lizards, birds, and rodents. Snakes in the tropics don't need to use food energy to keep themselves warm. Snakes can also get all the energy they need with just 3 meals a month.

Vipers have a pair of hollow fangs. They lie up against the roof of the mouth and shoot out when the viper strikes. The venom of Wagler's pit viper attacks red blood cells and their ability to carry oxygen, as opposed to attacking the nervous system.

Martisson, Chris, "The Classification of Snakes". The Encyclopedia of Snakes, p. 247.1995, New York.