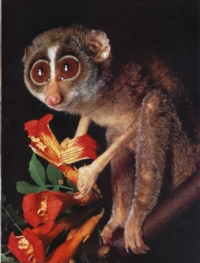 The slender loris is a small, nocturnal primate found only in the tropical rainforests of Southern India and Sri Lanka. They are able to live in wet and dry forests, as well as lowland and highland forests. They prefer thick, thorny vegetation wherein they can easily escape predators and find the large assortment of insects that is the mainstay of their diet.

Loris tardigradus malabaricus is a subspecies of the slender loris which is only found in India. The greatest concentrations of these slender lorises are found in the southeastern Ghats of India. The Ghats are a narrow strip of rainforest that runs down the length of western India.

The slender loris is about the size of a chipmunk, with long, pencil-thin arms and legs. It is between 6-10 in. (15-25cm) long and has a small, vestigial tail. It weighs about 10.5-12 oz. (275-348g). The slender loris' round head is dominated by two large, closely set, saucer-like brown eyes. They flank a long nose which ends in a heart-shaped knob. The eyes are surrounded by dark-brown to black circles of fur, while the bridge of the nose is white. It has a small, narrow lower jaw. The ears are large and round. Its coat is light red-brown or gray-brown on its back and dirty white on its chest and belly. The fur on its forearms, hands and feet is short. The slender loris has small finger nails on its digits. The second digit on the hand and foot are very short. They move on the same plane as the thumb, which helps them grasp branches and twigs.

The slender loris is an arboreal animal and spends most of its life in trees. Their movements are slow and precise. They like to travel along the top of branches. For the most part they hunt by themselves or in pairs at night, although they will come together and share a food supply. They live alone or with a mate and an infant. They will sleep with up to seven other lorises in a hollow tree or sitting up in the angles of branches. They are very social at dusk and dawn, playing, wrestling and grooming each other.

Mating occurs twice a year; in April-May and October-November. Gestation is 166-169 days, after which one, and occasionally two infants are born. During the first few weeks mothers carry their infants constantly. The infant will grasp its mother around the waist with both its front and hind legs. After a few weeks the mother "parks" the infant on a branch at night while she forages. The babies move around carefully at first but by two months they are maneuvering around quite well. More mature lorises who sleep in the same tree may visit them at night to play and eat with them. Females will reach sexual maturity in 10 months and 18 months for males. The slender loris has a life span of 12 to 15 years.

The slender loris is for the most part insectivorous. This means they eat insects, but they will also eat slugs, young leaves, flowers, shoots, and occasionally eggs and nestlings. They can stretch and twist their long arms and legs through the branches without alerting their prey. The slender loris eats a lot of noxious and bad smelling insects. They particularly like the acacia ant whose bite can numb a human arm. They also like toxic beetles and roaches. The slender loris will engage in urine washing, or rubbing urine over their hands, feet and face. This is thought to soothe or defend against the sting of these toxic insects.