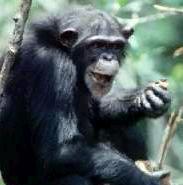 Chimpanzees are about 3 to 5 feet tall and weigh from 99 to 176 pounds. They have black hair. Adults are very often bald, usually a triangle on the forehead of the male, and more complete baldness in females. Their faces are hairless. Infants have pink faces which turn darker with age. Although chimpanzees have no tail, infants have a white tail tuft.

The favorite food of chimpanzees are fruits and young leaves, but they like many different types of food. In the dry season they will eat buds and blossoms, soft pitch, stems, galls, honey, bark and resin, seeds and nuts. Insects, like ants and termites are also in their diet. On rare occasions they will hunt small game like monkeys, pigs, and antelopes.

For the most part, chimps forage on the ground. While searching for food, troops will move around their territory, never staying long in one place. This allows the vegetation to recover before the chimps return to the area again. They do not compete for food with monkeys, who forage mostly in the canopy.

The newborns are helpless at birth. After a few days it holds on to the mother's hair and at 5 to 7 months rides jockey style on the her back. By four years, the infant usually walks, but stays close to the mother for about five to seven years.

Chimp communities are made up of 15 to 100 members. Males tend to stay in the community they are born into, but females move between different communities during their adolescent years.

Chimps have developed several behavioral adaptations. At night chimps construct nests of leaves and branches 18-29 feet high in a tree. Males will hunt cooperatively for baby monkeys or bush pigs. Some groups have been observed to use thin twigs or blades of grass to extract termites from their nests. Some chimps in western Africa use wood and stone tools as hammers to open nuts.

Chimps are on the endangered species list. There may be as many as 35,000 chimps in the wild, but destruction of their habitats, hunting and commercial trapping for the animal trade had reduced their population.