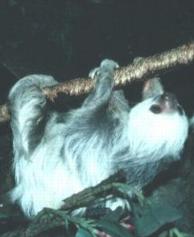 The Linn's sloth has a life span of 27 to 32 years. The female reaches maturity at the age of three and a half, and the male reaches maturity at the age of four or five. The Linn's sloth mates about any time of year, and only has one baby at a time. The pregnancy period is about ten months, and the interval period is 14 to 16 months between births. The baby sloth stays with its mother for about 5 months then spends time alone. The male sloth plays no part in raising their young. The Linn's sloth does not live in-groups.

The Linn's sloth has two claws on each front-foot that helps it to defend itself and aids in climbing trees. The coloring of the sloth is very helpful. The sloth has an algae that grows in the grooves of the fur that gives the sloth nutrients and which they get by licking themselves. The greenish color helps camouflage it also. The sloth has a big, pouched stomach that can help it digest the tough cellulose in leaves.

The Linn's sloth is an omnivore. It eats leaves, bark, buds, fruit, and sometimes small animals such as: mice, squirrel, and even kangaroo rats. Usually certain types of sloth like certain types of leaves. This particular type of sloth loves Cecropia tree leaves. But usually the sloth favors its mother's choice of vegetation.