The durian is thought to be one of Southeast Asia's most ancient and primitive trees. It grows in lowland rainforests, and is native to Borneo, Indonesia and Malaysia. It bears large, odoriferous fruits directly from its trunk and main branches. Scientists think it is one of the first plants to rely on animals to disperse its seed. It does this by bribing them with a nutritious and smelly food surrounding its seed. After eating the durian an animal would wander aroung looking for more food and deposit the seed far from the parent tree, encased in its own package of fertilizer.

The durian has a lifespan of 80 to 150 years, but can live longer than that. It is believed that durians only die when they are blown down in a storm or cut down by man.

In the rainforest wild durians can grow to heights of 90 to 130 feet and are considered a sub-canopy tree.

These trees do not bear fruit every year. The trunks are straight and about 4 feet in diameter and can form buttresses. bark is dark brown, rough with many vertical splits. It peels off irregularly, an adaptation to prevent epiphytes, lianas and parasitic vines from growing on it. The branches canbe straight or curved and are covered with coppery or gray scales when they are young. There are at least 15 different species of wild durians. D. testudinarumis very rare and is on the IUCN Red List of endagered species. More common are D. lowianus, D. lanceolatus, D. oxyleyanusand D. dulcis.

The durian's drooping leaves are evergreen and grow alternately on a branch. They are 2 to 10 in long and 1 to 3 in wide, oblong and rounded at the base and pointed at the end. They have a leathery texture and are dark-green and glossy above and covered with golden, hairy scales underneath. When they first appear they are folded at their mid-rib and stretch out as they mature. Seen from a distance they have a shimmering golden sheen to them. 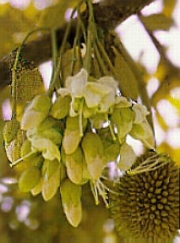 The flowers have a strong odor which attracts its principle pollinator, a small bat called a Dawn Bat (Eonycteris spelea). They grow in clusters of 1 to 45 flowers directly from the trunk or main branch. The large flowers are creamy white to golden-brown in color. The outer part of the flower is fleshy and has 5 fused sepals and 5 petals. Long stamens hang down from the center of the petals. The flowers are hermaphrodites, meaning they have a stamen and a pistil in the same flower. However, the flowers can't pollinate themselves because the stamens and pistils from the same tree come out at different times. The flowers are nocturnal bloomers and open from around 3 pm to midnight. The pistils with its female stigma come out first and get pollinated by flowers fromother trees. By the time the anthers of the stamen emerge, the pistils on the same tree are no longer active. By midnight all the flower parts except the pistil fall to the ground.

The most notorious part of a durian tree is its fruit. The fruit is ovoid, almost round in shape, and about 5 to 6 in. wide and 12 in long. It can weigh up to 18 lbs. Walking under a durian tree when the fruit is ripe could be hazardous to your health because the tough, yellowish rind is covered with densely set and pointed 3 to 7-sided spines. The durian gets its name from the Malay word duri,which means thorn. Large fruits like the durian tend to grow directly from the trunk in what is called a cauliflorous growth habit. The rind is scored with 5 natural lines of weakness. When the fruit ripens and falls to the ground it splits open along these lines.

Inside are 5 seeds, each about 2 in in diameter. The seed is surrounded by a custard-like aril which smells to high heaven. An aril is part the seed's own fleshy outer covering. Arils are rare in rainforest plants. Only 1% of rainforest plants have arils. The incredibly strong odor of the durian aril is an advertisement to all kinds of animals that a great meal is waiting for them. Because the seeds are so big the durian tree depends on large animals like elephants and rhinoceros to eat and disperse the seeds. The seeds are tough enough not to be damaged by chewing or digestive juices. Other animals, like monkeys, gibbons, fruit doves, tapirs, orangutans and man enjoy the fruit of the durian.

The durian fruit has a powerful odor reminiscent of decayed onions, Limburger cheese and sherry wine. But the texture is like a smooth, creamy custard and it has a rich, sweet, faintly almond flavor. Many people are hesitant at first to eat the fruit because of its odor, but once they do, they find it delicious and irresistible.

The durian is dependent on a small nocturnal bat, called the Dawn Bat, for its pollination. Without the bat the durian cannot fruit. Not until a few years ago was the importance of the Dawn Bat completely understood. Today the bat's limestone roosting caves are being mined for the production of cement and bats are being driven out or killed. The mangrove swamps that provide the bat with its other main source of food, the Mangrove Apple, are being filled in and built on. The numbers of Dawn Bats have been declining rapidly, as has the durian crop.

Durian is one of the favorite fruits in Southeast Asia where it is known as the"King of Fruit". Most of the durians sold in the market are grown on plantations and one durian can cost $7 American dollars. Without the bats there will be no durian, which to many people in Southeast Asia is unthinkable.