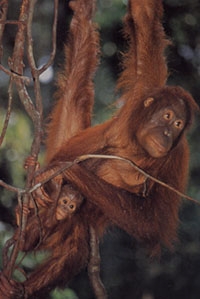 Orangutans live in the tree tops of the Southeast Asian tropical rainforests of Sumatra and Borneo. They spend most of their lives in trees and descend from the trees very rarely. The rainforest has an average monthly temperature of 20 to 28° Celsius. It has an annual rainfall of between 1.5 and 10 meters. It receives steady rainfall throughout the year with little seasonal variation.

The name Orangutan means "man of the forest" in Malay. The Orangutan is the largest of the tree dwelling apes of Southeast Asia. Orangutans can grow up to five feet tall, but males are usually 4 feet tall and females are 3 feet. They have an arm span of 8 feet when full grown. The adult male orangutan can weigh up to 220 lbs. and an adult female can weigh up to 110 lbs. They are heavily built and their arms arevery long and lanky, but their legs are short and weak. Orangutans have long, thin reddish brown hair. They have a high and sloping forehead and a rounded snout. Males have cheek pads made up of fat which keep on growing as they get older. The big toe on each foot can rotate and touch the ends of the other toes, like our hands. So Orangutans have four "hands". When on the ground, Orangutans walk on all four limbs. Their knees are bent inward and their arms are placed either flat or clenched on the ground. Their calls are whining and squeaking sounds. The adult male makes a long roar- like call.

Orangutans are duirnal and feed during the day. At night they build a platform style nest out of branches about 40 to 50 feet above the ground.

There are many special adaptations for Orangutan in the rainforest, such as long, strong arms for traveling among the trees, curved feet for extra balance when standing on branches and opposable thumbs for grabbing branches.

The Orangutan mates year round, usually beginning at the age of 8 -10. The female is pregnant for 260 to 270 days before the baby is born. A newborn orangutan usually weighs 3.4 - 4.5 pounds. They usually have one baby at a time. The baby nurses every 3 to 4 hours. At around 4 months they begin to take soft food that their mother has chewed for them. The young cling to their mother when traveling until they are about a year old. They aren't weaned until they are about 3 1/2 years old. For the first 3 to 4 years of a young Orangutan's life it will not leave its mothers side. The infant is usually carried on the back or side of the mother. A young Orangutan spends a total of 6 or 7 years close to its mother. During this time the juvenile learns what is needed to survive, such as how to gather food and how to swing from tree to tree. Birth intervals are usually 4 years unless conditions are bad. Females are sexually mature at about 8 years, but males don't become sexually mature until they are about 14 years old. Young Orangutans sometimes hang out in groups (but not too far from their mothers) before gaining enough courage to go off on their own. The young are usually 5-6 years when they move out on their own. At age twelve to fifteen the Orangutan is sexually mature. 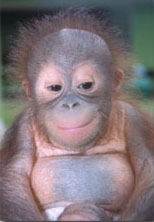 The Orangutan is a very solitary animal. Sometimes they live in a small group of 2 females. The males have a territory which overlaps the territories of other females. They are aggressive towards other males and their territories don't overlap. They can live up to 45 years the wild and 50 in captivity.

The Orangutan is an omnivore but it mainly eats fruits, especially figs. Other food includes nuts leaves, bark, insects and occasionally birds. Orangutans find most of this food up in the trees where they live. They even find their water up in the trees, in hollows, on leaves, and on their own hair after a rain. Most of the Orangutan's day is spent foraging for food and resting.

Humans are the only predators to the Orangutan. Orangutans prey upon insects and birds. The Orangutan is currently a seriously endangered animal. Experts say estimate that there are only between 15 and 20,000 Orangutans left in the world today.

Trees play an essential role in an Orangutans life. The deforestation of the tropical rain forests is the main reason why they are endangered. It's biggest natural enemies are humans because they poach, trap, and sell them for pets. The governments of Singapore and Hong Kong have prohibited the import and export of Orangutans. Their habitat needs to be more secure.

"On The Line- Tropical Rain Forest",http://www.ontheline.org.uk/explore/nature/trfindex.htm, (1/22/02)