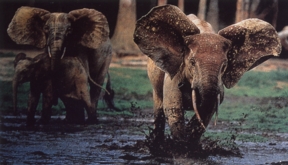 It was always thought that there were two species of elephant in the world; the African savanna elephant, (Loxodonta africana) and the Asian elephant, (Elephas maximus). But now, through DNA testing, it has been discovered that there is a third species; the African forest elephant.

When a DNA identification system was set up to trace where poached ivory was coming from, scientists found that the African elephants consisted of two very different species. They expected slight variations in the genetic makeup of the savanna elephant, but were surprised to discover the two different species.

The new species, the forest elephant, was considered to be a subspecies of the African elephant, and was known as Loxodonta africana cyclotis. That means scientists thought that, although the elephants had adapted to their forest habitat, they were still savanna elephants. But DNA evidence shows that about 2.5 million years ago two genetically different strains of elephants evolved in Africa. The forest elephant, now known as Loxodonta cyclotis,found its niche in the equatorial forests of central and western Africa. Here they have lived hidden from view and practically forgotten.

When you think of the African elephant you probably picture the savanna elephant. It is a huge animal, standing almost 12 feet tall at the shoulders. It has large ears that come to a point at the bottom. The tusks are long and slightly curved. They live on large, dry grasslands with a few thorny acacias dotting the plains.

Forest elephants are adapted to living in dense forests. Their tusks are straight since curved ones might get caught in the underbrush and vines of the forest. They are smaller so they can move around the dense forests more easily.

Not much was known about the forest elephants because tracking them was very difficult. Scientists have begun tagging forest elephants with tracking devices so they can be more easily followed. It has recently been discovered that forest elephants can have a home range of about 2,000 square kilometers (1,243 square miles).

Seventy years ago three to five million elephants inhabited Africa. Today only about 500,000 elephants remain. One third of these are forest elephants. Because there are now two separate species, there are fewer elephants of each species. Elephants in Africa are now more endangered than previously thought. The hard and pink ivory of the forest elephant is highly prized by poachers who are difficult to catch in the cover of the rainforest. Logging is another threat to the forest elephant.

The African elephant, Loxodont africana, is listed as endangered under the Convention on International Trade of Endangered Species (CITES). Conservationists are afraid that declaring the forest elephant as a separate species could open a loophole under the current treaty and open up hunting of forest elephants for their ivory. A study of the forest elephant's status is under way, sponsored by the National Geographic Society, European Union, National Science Foundation, National Institutes of Health, and U.S. Fish and Wildlife Service.