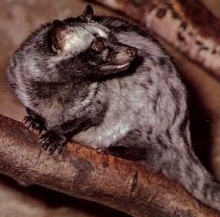 While growing up in Indonesia, I would sometimes wake up to a terrible racket in the ceiling, occasionally followed by a sickly-sweet odor reminiscent of a striped skunk. It was the musangs, or common palm civets, having some sort of spat. Once one fell through the ceiling, almost hitting my father, who had gone to investigate. Like pesky squirrels they would sometimes invade our attic.

The common palm civet is found from the Himalayas and southern China, to the Philippines, the Malay peninsula, and the Indonesian islands. It is a highly adaptive animal and can live in dense forests, agricultural areas, and even alongside humans.

Weighing from 4 to 11 pounds, the palm civet's head and body length is 17 to 28 inches (43.2-71 cm), with a tail length of 16 to 26 inches (40.6-66 cm). Its ears are small and faintly pointed, as is its nose. It has a long and slender body with short legs. They have a coarse grayish to brown coat with black-tipped guard hairs over all. Three rows of black spots run along each side of its body. The hair around its eyes, cheeks and muzzle is black, with spots of white under each eye and on each side of its nose. The ears, feet and last end of its tail are also black.

A nocturnal omnivore, the palm civet hunts alone. They are expert climbers and spend most of their lives in trees. They eat small vertebrates, insects, ripe fruits and seeds. They are very fond of palm sap, therefore their common name. The sap is used by natives to make a sweet liquor called "toddy", which gives the palm civet its other common name. The palm civet is also fond of coffee cherries. They eat the outer fruit and the coffee beans pass through their digestive tract. An expensive coffee called kopi luwak is supposedly made from these coffee beans. Kopi luwak is said to have a gamy flavor and sells for more than $100 per pound.

Palm civets stake out territories which often overlap during times of adequate food supply. When spending time in one area, musangs will use the same tree to sleep in during the day. Plam civets reproduce throughout the year although it has been recorded that kittens are most often seen from October to December. Kittens are born in a litter of 2 to 5 young. Palm civets become sexually mature at 11 to 12 months. In captivity the common palm civet can live up to 22 years.

The common palm civet disperses seeds of the trees on which it feeds by eating the seed pulp and passing the seeds well away from its parent tree. Although not much is known about the palm civet, it is believed that its nocturnal habit was developed to avoid predators. It is plentiful in its natural range and is not endangered.