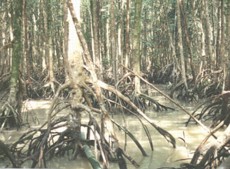 Mangroves are woody, specialized types of trees of the tropics that can live on the edge, where rainforests meet oceans. Found on sheltered coastlines and river deltas, they grow in brackish wetlands between land and sea where other plants can't grow. They protect the coastline and prevent erosion by collecting sediment from the rivers and streams and slowing down the flow of water. There are about 39.3 million acres of mangrove forests in the warm coastlines of tropical oceans all over the world. More than 10.5 million acres, or 27% of mangrove forests are found in Southeast Asia.

Mangrove trees look as if they grow on stilts. The stilts are their specialized aerial roots which hold the trunk and leaves above the water line. Mangrove forests are affected by the rising and falling of the ocean's tides. The aerial roots and tap roots can filter out the salt in the brackish water they grow in. Support roots grow directly into the mud to anchor the tree. Other roots snake up and down with the upward loops rising above the salt water level. Salt crystals taken up by the roots are stored in the leaves. The mangrove rids itself of the salt by shedding its leaves after a while.

It is believed that the earliest species of mangroves came from the Southeast Asian region. There are more mangrove species in this region than anywhere else in the world. It is thought that seeds of the mangrove moved westward to India, East Africa and finally to Central and South America on ocean currents 23 to 66 million years ago. Mangroves of the Americas have similar but fewer species than those in Africa and far less than Southeast Asia. The specialized seeds of the mangroves are tough and float, and can travel great distances in salt water and take root far from its parent tree. The seeds germinate and grow into seedlings right on the parent tree. During this time they acquire the carbohydrates they need later to grow on their own. The tree eventually drops its seedlings, where they may take root in the mud below, or are swept out by the tide.

One of the most biologically diverse forests, mangrove forests are known as the "rainforests by the sea". The forests are the breeding grounds for fish, shrimp, prawns, crabs, shellfish and snails. Mud skippers are found in mangrove forests. The mudskipper has made adaptations so it can skim across the mud during low tide when the ground is uncovered in many places, traveling from puddle to puddle. Mangrove forests are also nesting sites for many shore birds and home to crab eating monkeys and proboscis monkeys, fishing cats, lizards, sea turtles, and many more animals. For many species of fruit bats, like the dawn bat, mangrove blossoms and fruit make up a large part of their diet.

Mangroves have a very specialised adaptations that enable them to live in salty waters. Breathing roots allow them to survive in anaerobic sediments. Buttresses and above-ground roots enable them to grow in unstable mud flats. Their foliage removes excess salt from the sap, and they conserve water to cope with periods of high salinity. Their seeds are bouyant to allow them to disperse and establish themselves in new areas.

Today mangrove forests are one of the most threatened habitats in the world. Mangrove roots are very susceptible to pollutants like crude oil clogging their lenticels, and continual flooding from artificial dikes and sea walls. Mangroves act as sinks which concentrate pollutants like sewage, toxic minerals and pesticides and herbicides. Over time the stress of the pollutants and reduced light kill large areas of mangroves forests. Mangrove wood also makes a superior kind of charcoal and many trees are being cut down to sustain local charcoal industries. Mangrove forests are also being filled in for developments and as a form of mosquito control.

Public awareness and education about the mangrove forests may help protect them. It is neccesary to involve local communities in managing and protecting their mangroves. Designated conservation areas may also save some of the forests. However, national governments have not been able to enforce laws and regulate development and industry to save the wetlands. Adequate provisions for conservation and restoration have not been included in development of the mangrove wetlands.

"Everything You Ever Wanted to Know About Mangroves", http://mbgnet.mobot.org/salt/mudflats/mangrove.htm

Sasekumar, A. "Biotic Diversity and Ecology of the Mangrove Forest", http://www.cbs.uoguelph.ca/mangrove/ (4/6/03)