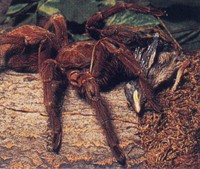 The Goliath bird-eating spider is, as its name suggests, large enough to eat a bird. This giant spider is found in the northern South American countries of Suriname, Brazil, Guyana and Venezuela. Its habitat is the wet swamps and marshy areas deep within the primary rainforest. The Goliath bird-eating spider was named by explorers from the Victorian era who first reported them to the western world, and witnessed one eating a humming bird.

Goliath bird-eaters are the world's largest species of tarantula. Tarantula is a generic name for hairy spiders. This hairy spider has a leg span of 12 inches (30.5 cm) across, or about the size of a dinner plate or small pizza, and they can weigh 2.5 ounces (70 g). Their bodies are dark and light brown in color. Like most spiders they lack antennae and have four pairs of legs. Their bodies are made up of two external parts; the cephalothorax, or head and neck combined, and the abdomen. Their eyesight is weak even though they have 8 eyes. They can only see differences in the level of light. They rely instead on sensory hairs that feel the slightest vibrations on the ground and in the air, and allows them to detect movement.

Like most tarantulas, the Goliath-bird eater is a deep burrowing species. They live in burrows in the ground dug by the spiders themselves, or abandoned by rodents. The female spends most of her life in her silk-lined burrow. They are nocturnal spiders and don't travel more than a few feet from home, resting in their burrows during the day.

The Goliath bird-eating spider is a solitary arachnid, and only associates with other spiders of its species when mating or guarding its young. Males can be identified by the mating hooks on the first set of legs. The male will come to the entrance of the female's burrow and try to entice her out. He will use his mating hooks when she comes out to restrain her fangs while he tries to mate with her. Afterwards he has to make a fast getaway or be injured or killed by the female. About 50% of the males are killed or maimed while trying to mate.

The female deposits about 50 eggs in a silken egg sack about 1 inch (3 cm) in diameter, and stores it in her burrow. She guards it for 6 to 7 weeks, even taking the sack with her when she leaves the burrow. After the young spiders hatch they stay in the nest until their first molt, and then go out on their own.

The Goliath bird-eating spiders are considered to be very aggressive and do not make good pets. Unlike other spiders, who are noiseless, the Goliath bird-eating spider can make a hissing noise to frighten off threats by rubbing bristles on its legs together. They will also rear up on their hind legs in a threat position. Their two fangs have poison glands at their base. Although they are not very toxic to humans, they can cause severe pain, nausea and sweating. The venom works on the nervous system and paralyzes its smaller victims. A more painful way of defending itself is to flick off the hairs on its abdomen with its legs. These microscopically barbed hairs can be irritating to the skin and lungs. They will cause swelling for a few hours like a nettle rash. It is most serious when the hairs get into your eyes or mouth.

The life expectancy for a female Goliath bird eater is about 25 years. Most require about 10 years to mature to adults. Males live for only one year or less after mating. The spiders continue to molt after reaching maturity and are able to regrow any limbs they might lose.

The size and power of the Goliath bird-eater makes it possible for them to eat larger prey. They rarely eat birds, although they may eat hatchlings. Its usual diet consists of frogs, small snakes, beetles, insects, lizards and even bats and pinky rats. They don't have any special hunting technique, like building webs or leaping on their prey. They will sneak up on their prey and pounce on their victim, injecting them with venom which paralyzes them. They will often carry their prey back to their burrow or a safe location to eat it at leisure. They don't have teeth to tear or chew their food, but regurgitate digestive juices onto their victim. The juices break down the soft tissue making it possible for the spider to suck up the liquid and eat its meal.

Although it is not threatened in the wild, it does have natural enemies like certain spider wasps, some snakes, and other tarantulas. The spiders are most vulnerable during molting when they are fragile and can't move very well. Smaller insects can easily kill a tarantula in the process of molting. It takes several days for the exoskeleton to harden again. The most dangerous enemy the spider has is man and the destruction of its habitat.