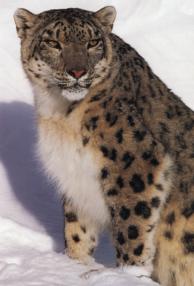 The male snow leopard marks its territory of 4 to 40 square miles with several females inside .The snow leopard is a solitary animal. It mates from January to April. They have 2-3 young in a litter. During birth, the male brings food to the female. After birth, the male leaves the female. The babies are born blind and deaf and they cannot walk. At about three months, they follow their mother on a hunting trip. About two years later they leave their mother. They stay together for a short time and then they go their separate ways. They have babies every two years. The average snow leopard lives up to 20 years.

The snow leopard's coat allows it to blend in with the rocks. The thick fur on the soles of its feet insulate the paws against the snow in the winter. The enlarged nasal cavities help it to breathe in high altitudes.

The snow leopard is endangered. There are only 4,000 to 7,000 left in the world. Hunting and the decline of its prey threaten the snow leopard's existence. There are 47 parks all over the world, which serve to protect them.