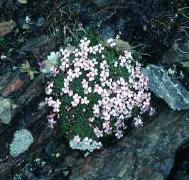 Moss Campion is part of the pinks family. It is well adapted to growing in the lower, and sometimes higher Alpine regions. Moss Campion only grows about 5-15 cm tall, hugging the ground for warmth. Its leaves are very small, not exposing too much of the plant to wind and freezing temperatures found in the Alpine biomes. Its mounded cushion shape protects it from the cold, drying winds.

It looks like a soft, green cushion, sprinkled with small pink flowers. It grows in the sandy, rocky soil of the Rocky Mountains in the United States and can also be found growing in the Alps of Switzerland.