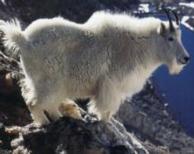 Mountain Goats can be found in the mountains of northwestern regions of North America, where they seem to cling and move around on the impossibly steep slopes. Mountain Goats have two beige colored horns that curl back and reach a length of about twelve inches. Mountain Goats weigh about 100 to 200 pounds. They are 4.5 feet long and their shoulder height is about 36 to 48 inches. The females are smaller than the males by almost 30%. They have very round bodies which protect them from the cold.

Their legs are about 20 inches long. Their hooves are adapted to the rugged slopes by being flexible, like rubber, so they can jump from rock to rock. Their coloring is white and their fur is very fluffy and every strand of hair is about 2 inches long. The Mountain Goat has eight teeth in front so it can easily grab big patches of grass.

The Mountain Goat breeds yearly between November and January. Gestation periods last at least 150 to 180 days and the babies are usually born in the spring. This is a beneficial time for the goat's babies, or kids, to be born because it is easier to survive in the warmer weather. Also, there is more food in the summer which the mother can make milk from. When she is ready to give birth, the mother hides in the cliffs in her home territory so that she is safe from predators. The kids are very independent a couple weeks of after birth. The babies stop getting milk from their mother after 3 to 4 months and they stay with her until she reproduces again. Both sexes reach sexual maturity after 30 months.

The Mountain Goat changes its social groupings seasonally. They live in big groups in the winter, and smaller groups, or alone in the summer. The male goats are dominant during breeding season. However during the non-breeding season, the adult females are dominant. Mountain Goat hierarchies are determined early by the kids' playing behavior. The stronger more dominant kids become the leaders of their group. The Mountain Goats' habitat also changes from season to season. They migrate between lowland winter areas, and high elevation summer ranges.

Some adaptations that help a Mountain Goat to survive are its horns, jumping ability, its hooves, and its teeth. Their horns help to defend them from predators. Mountain Goats have a lot of strength in their hind legs that allow them to jump great distances. Their hooves have a slit in the middle to make them more flexible. They have eight teeth on the top and bottom for an easier way to grab big patches of grass. Mountain Goats' diet is basically grass, woody plants, and moss. They get most of their water from their food.

Mountain Goats are prey to coyotes, mountain lions, and bobcats, so they have to be careful where they go. Mountain Goats help the environment by their droppings which add nutrients to the quality of the soil.

Mountain Goats are very close to being on the endangered species list. Biologists are trying to stop hunters from killing these herds.