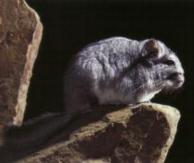 In the wild, chinchillas can be found in the Andes alpine regions, but because they are an endangered species, they are not easily found. The chinchilla has a silvery gray pelt, with black tipped hair which is very soft. There are usually 60 hairs growing from every follicle. Adult males weigh about 500 grams. The females are much larger, averaging between 600 and 800 grams. Chinchilla's have big round ears, andeyes. They have narrow hind feet that have four digits with stiff bristles around the weaker claws. Their tails have long gray and black hairs on the dorsal or back surface. The chinchilla stands about an inch from the ground when on its four feet, and it is about half the size of a rabbit.

Chinchilla's usually live in clans of about 100 individuals. There are no dominant males or females that lead the group. The gestation period is long for a small animal, up to 111 days, but the female can still produce up to two litters each summer. The female gives birth to two to three offspring in each litter, each one weighing close to 35 grams. Lactation lasts six to eight weeks. Both males and females can become fertile at eight months of age. The lifespan of the chinchilla is about ten years in the wild.

Chinchillas are nocturnal. The colder the weather is at high altitudes, the denser the chinchilla's fur. The chinchilla's ability to jump, cling, and climb over rocks, protects it from predators and helps it to survive in the wild.

Chinchillas are herbivores. Their diet in the wild consists of plants, roots, and grasses. The chinchilla's chief predator is man. Since chinchilla fur makes soft and beautiful coats, millions of chinchillas were killed for their pelts until they became nearly extinct in the 1940's. To make one chinchilla coat you need 120 to 150 pelts. They are now on the endangered species list, and are protected by law.

Chinchillas help the environment by distributing seeds by misplacing them. People have tried to breed chinchillas in captivity, but reintroduction into the wild has not been successful.