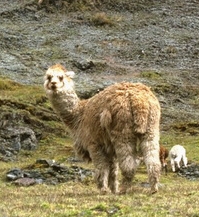 Most llamas today live in the high Andes Mountains of western South America. They can be found in Argentina, Bolivia, Chile, and especially Peru. It is believed that llamas may be the domesticated descendants of the wild guanaco. They live in grassy open spaces at very high altitudes of 7,400 - 12,800 feet, where the air is so thin there is only 40% oxygen. The Alpine plains are dry and cold and the soil is not very good. The grass is difficult for most animals to digest, but the llamas are able to adapt to these harsh conditions.

Llamas are part of the camel family. They are approximately 36-47 inches wide at the shoulder and measured from the head they are 4 feet tall at the shoulders. They can weigh up to 400 pounds when they are full-grown. They have 2 toes per foot and the bottoms of their feet are padded with tough leathery soles to protect them from sharp rocks. Their feet are slender and their limbs are long. They have an unusual way of moving; they pace, which means that both legs on the same side raise together so they can run very quickly. They have long, thick, coarse hair with spots of color that can protect them from being attacked by prey. They can be different shades of brown, black, peach, white, gray and roan. They are very intelligent and learn quickly.

Unlike other hoofed animals, camels and llamas have feet with 2 toes. The bottom part of the foot is divided in 2 and is covered by a tough leathery sole. Llamas are especially sure-footed. Because of these pads, they have a good foothold on rocky and slippery ground.

Llamas have unique blood that adapts well to the poor oxygen in the high altitudes where they live. Llamas have more red blood cells per unit volume of blood than any other mammal. The hemoglobin, which is the oxygen carrying substance of the cell, reacts faster with oxygen.

Also, llamas are able to travel long distances without water. They have 3 stomach compartments and they chew their cud. Cud is a mouthful of swallowed food that is regurgitated from the first stomach. Because of these special features the llama makes an excellent packing animal for the people that live in the remote areas of the Andes Mountains.

A female llama begins to breed when she's about a 1 year old. She's able to have 1 baby, or cria, a year until she's about 15 years old. Llamas can be bred at any time of the year. They don't have a heat cycle; they are what are called induced ovulators. This means ovulation happens 24-36 hours after breeding. She almost always gives birth to 1 baby at a time. A baby llama weighs 18 to 33 pounds when it's born. It's able to stand up on it's own one hour after it's born. The mother nurses the baby llama for 6 months. Male llamas are not used for breeding until they are about 2-3 years old.

Llamas were first domesticated by the Incas around 4,000 BC near Lake Titicaca. Their breeding was controlled by the government. The llamas were used in many ways. Male llamas were used as sacrifices. The wool from the llama was used to make coarse woolen blankets for the common people, and their meat was eaten. They were also used as beasts of burden. Llama caravans went to distant provinces to trade. They were so important to the prosperity of the Incas that llama herders were paid very well. After the Spanish conquistadors came in the 1500's, diseases killed many people as well as llamas. But the llamas were still valuable beasts of burden for several centuries and were called the "ships of the Andes".

Llamas are social animals and mainly live in herds in captivity. Most people who have llamas almost always keep the male and female in separate enclosures. This keeps the llamas from fighting and controls breeding. Young male llamas join the male herd at about a year old. In a group of male llamas, they fight each other to determine which one will be the leader of the herd. Most of the time the strongest and largest male llama will lead. The group is called a herd. The average life span of a llama is 15-20 years.

Llamas eat mainly grass, shrubs, and lichens. Lichens are moss-like plants that grow on rocks and wood. Llamas are herbivores, which means they are plant eaters. They chew their food just a little and swallow it, then bring up a wad of cud. They then finish chewing it and swallow it again and finally, digest it. Cud is partly digested food. Llamas eat mainly hay, grass, and grain when in captivity. For treats, llamas like cut-up apples, carrots, broccoli, and orange peels. Because the llamas have 3 stomach compartments, the food must pass through all the stomachs during digestion.

Enemies of the llamas are mountain lions, snow leopards, cougars, and also humans. Humans used to hunt them for their wool and meat. Most llamas now are kept in captivity, so they are protected from most predators. If they are attacked, the male llamas sound off a warning so that the rest of the herd can run away. Since llamas are herbivores, they don't prey on other animals.

There are many llamas in the world today. They are not an endangered species. They used to be hunted for their wool but there are now laws to protect them. Llamas are not found in the wild anymore. They are in family herds and they live in captivity.