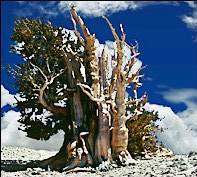 If you could imagine a living tree as old as the pyramids of Egypt, what do you think it would look like? It would look like a bristlecone pine, Pinus longaeva, the oldest known tree species in the world.

The bristlecone pine only lives in scattered, arid mountain regions of six western states of America, but the oldest are found in the Ancient Bristlecone Pine Forest in the White Mountains of California. There the pines exist in an exposed, windswept, harsh environment, free of competition from other plants and the ravages of insects and disease. The oldest bristlecones usually grow at elevations of 10,000 to 11,000 feet.

The oldest known tree is "Methuselah", which is 4,789 years old. To keep Methuselah from harm, this tree isn't labeled, as the other trees are. An older tree called Prometheus was killed shortly after it was discovered in 1964. This happened when a geologist searching for evidence of Ice Age glaciers was taking some core samples from several bristlecones. Just as he realized he had found a tree over 4,000 years old, his coring tool broke. Amazingly the U.S. Forest Service gave him permission to cut down the tree. Prometheus turned out to be 4,950 years old. It was a 300 year old tree when the pyramids were being built in Egypt. After people heard about this incident, the U.S. Forest Service tightened security around the bristlecones.

The bristlecone pine is a multi-trunked tree, gnarled and twisted by the elements. Much of the pine is dead wood. Wind whipped sand and ice scour the dead wood smooth and beautiful. As a survival strategy much of the bark and tissue that conduct water dies back after the tree is damaged by fire, drought or storms. This reduces the nutrients the tree has to supply to tissue and balances the result of the damage. The remaining parts are very healthy. A 10 inch strip of bark can sustain a large crown. This bark is red-brown in color and grooved with thick, irregular ridges.

The crown of the bristlecone pine is rounded. The branches and needles look somewhat like a bottle brush because of the closely spaced needle whorls. The needles are deep yellow-green, with blunt ends. They come in bundles of 5, and are 1 to 1.5 inches in length. Because the needles can live twenty to thirty years, the tree doesn't need to expend much energy on adding new needles. This helps the tree survive through years of stress.

The male flowers, or catkins are red-purple in color. The female cones are ovoid, or egg-shaped, and dark purple to brown when mature. Each cone is 2.5 to 3.75 inches long and take 2 years to mature. The tree is named for the long, hooked spine on the scales of the cones. Even cones from the oldest trees are able to produce a seed that will grow.

These ancient trees don't grow very tall, the tallest being 60 feet (18.3m), but usually less than that. The girth of the largest tree, the Patriarch, is 36 feet 8 inches (11.2m), but this tree is comparatively young at only 1,500 years. The average age is 1,000 years, with only some trees over 4,000 years. The trees put more energy into surviving then growing big. A bristlecone trunk may grow less than 0.01 of an inch in girth per year.

The wood of the bristle cone is very dense, and trees can remain standing for thousands of years for hundreds of years after dying. They will finally fall over when the roots decay or are worn away by erosion. The Forest Service has very strict rules concerning taking any of the dead wood from the parks.

Bristlecone pines are fairly common in the regions where they grow. Only a few bristlecones in isolated, harsh environments have been able to grow to incredibly old ages. These old trees are now protected by law and guarded carefully by the US Forest Service.