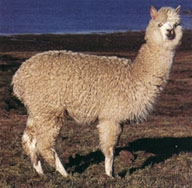 The alpaca is a type of llama that lives in the Andes Mountains of South America. The alpaca is part of the camelidae family and is closely related to the well-known llama. The llama is a much larger animal, standing up to 4 feet at the shoulder and weighing 340 pounds. Both are semi-wild domesticated animals related to the wild guanaco. Some think the alpaca may be a cross between a llama and vicuña.

Alpacas have small heads, a cleft upper lip, and big pointed ears. Their bodies are slender with long necks. They have long legs and short tails. The alpaca has 22 different shades of color for its coat, like black, gray, white, brown to name a few. They weigh 120-140 pounds on average. The alpaca is 3-3.5 feet tall at the shoulders, and measures between 4-7 feet in body length.

Of all the attributes of the alpaca, its history is the most interesting part of this animal. The oldest known recording of these charming creatures was 1,000 years before the great pyramids of Giza. The Inca nobles demonstrated their wealth by the number of alpaca's they owned, as well as showing off the beautiful fur garments. The trade in the fur of the alpaca, 2,000 years after the great pyramids, created a thriving Peruvian economy. So it continued for thousands of years with these magical animals creating wealth and prosperity for their Inca owners, until the 17th century when the Spanish Conquistadors conquered the Inca Empire.

The Incas sought refuge from the Spanish, and took a limited number of these precious animals to the heights of the Andes. If this had not happened, there may not be very many alpacas left today.

These animals are easily domesticated. Others describe their personalities as being warm, friendly and gentle. The special charm of this mysterious breed has been a well kept secret except for the limited people who have the privilege to keep such a prize.

The reproductive periods for the alpaca are from 4-16 years. In the Andes the mating period is in August and September. The alpaca has crias [babies] about every 11 months, which weigh 15-20 pounds at birth. They live 15-25 years, with a few living up to 30 years. The alpaca live in herds. Alpacas live at elevations of 14,000 to 16,000 feet and on ranches throughout the world.

The alpaca has very thick fur to survive the cold climate of the Andes. Its long neck helps spot predators among the rocks of the mountain slopes.

The alpaca is a herbivore, which means that it eats plants. The alpaca grazes on grass and eats weeds, shrubs and trees. It has special stomach secretions that help it absorb 50% more nutrients than a sheep, allowing it to survive where there is only poor quality grass. The alpaca is prey to pumas, leopards, and other carnivores in the wild.

The alpaca were almost extinct following the invasion of the Spanish conquistadors in regions of South America. They are now plentiful in the wild at about 3.5 million strong. These animals have been domesticated for over 5,000 year.