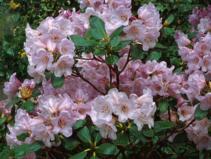 Rhododendron campanulata ssp. aeruginosum is a wild species rhododendron found in the Himalayan alpine regions of Northern India, Bhutan, and Nepal. It grows on the stony alpine slopes and ledges at altitudes of 12,000 to 14,500 feet. Rhododendrons are part of the heath family, like blueberries, cranberries, and heathers.

The evergreen, leathery leaves of this plant can be as small as 1/4 of an inch, to over three feet in length. Their shapes can be very rounded or long and thin. The leaves grow alternately on the stem. The upper surface is dark green and glossy, while the undersides are fuzzy. The undersides are called indumentum, and can have many colors. Some are cinnamon colored while others are silver to white. R. campanulata ssp. aeruginosum is a low growing form of rhododendron, usually rounded in shape, and up to 4 feet tall. The leaves, which are 3 to 4 inches long, have a beautiful blueish metallic shine to them. Their indumentum starts out whitish when the leaves are young and turn a fawn color as they mature.

Rhododendron flowers grow in large trusses, or clusters, which can be up to 10 inches across. Each flower is shaped like a small bell about 1 - 1.5 inch long. They bloom from spring to early summer, and may be pink, white, red, purple, yellow, orange, or various shades of each. The flowers of Rhododendron campanulatum ssp. aeruginosum are a pink to purple color with some dark blotches.

There are over 900 different species of rhododendrons all over the world. Most of the species are found in Southeast Asia, from the Himalayas through Tibet, China, Thailand and Vietnam, to Malaysia, Indonesia, Phillipines and New Guinea.

Species rhododendrons live naturally in the wild, which means that man hasn't interfered with the way they grow or look. The wild rhododendrons are found from sea level to 19,000 feet in elevation, and grow in many different habitats, including alpine regions, coniferous, and broadleaved woodlands, and even rainforests. They can grow from a few inches high to as high as 100 feet. The first of many rhododendrons which came from Asia was discovered by Captain Hardwicke in 1799. R. campanulatum was brought to England in 1825.

All parts of this plant contain a poison called grayanotoxin, but the leaves are the most poisonous part. Eating this plant can give you a severe stomach ache. It can also cause liver damage and pneumonia. If you have grazing animals, it is important to keep them away from your rhododendrons.

In the Himalayas rhododendrons are often found at the same elevation as the summer grazing pastures. Wood from the rhododendron is used for firewood and building materials by shepherds. Large stands are often clear cut, which leads to major soil erosion. Many areas where rhododendron forests used to grow no longer exist.

click for larger images (opens in a new tab)