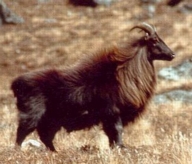 The head is also proportionally small, with large eyes, and small pointed ears. The horns are triangular in shape and curve abruptly backwards, and then inwards. This prevents serious injury in head butting battles during mating season. The horns get to a maximum length of 18 inches. The female horns are much smaller.

In the winter the tahr has a dense, reddish to dark brown woolly coat with a thick undercoat, which keeps it warm. The males will grow a long, shaggy mane around their neck and shoulders, which grows down to the upper parts of their legs. In the spring they lose much of their coat, and it becomes lighter in color.

Their hooves have a flexible, rubbery core that allows it to grip smooth rocks, while a hard, sharp rim can lodge into small footholds.

The Himalayan tahr will migrate down the mountain to more protected areas in the winter. There they form mixed herds of 15 to as many as 80 animals. The old bucks usually stay off by themselves. In the spring the males will form all-male groups, before joining the females again in the autumn.

In the early morning and late afternoon they will feed, moving up the slopes. Midday they spend resting and ruminating, high enough to be safe from predators. In the afternoon move back down the mountain, eating as they go. They are very shy, and are difficult to approach. When sensing danger they will quickly run off, easily navigating the steep slopes and uneven terrain.

The tahr will eat almost any vegetation they can find, from grass and herbs to the leaves of shrubs and trees. They will rear up on their hind legs to reach for branches which they then hold down with their front legs as they eat. The tahr is a ruminant and has a multi-chambered stomach. After feeding it needs to regurgitate the pulp and chew it over again. This allows it to get the maximum nutrition out of the tough vegetation it eats.

During the breeding season in October through January, the male Himalayan tahr will ruff up its mane to intimidate its opponents. He will try to impress females with his appearance and spend hours strutting in front of them before mating. When challenged by another male, they will try to lock horns and throw each other off balance.

The female will slip away to be by herself to give birth to a single offspring after a 7 month gestation period. The young tahr depends on its mother's milk for about 6 months, but will stay close to her for up to 2 years. In the wild the tahr will live to be about 10 years, and up to 20 years in captivity.

Although the Himalayan tahr will sometimes come down into forested areas to compete for food with domestic goats, it prefers to feed on high pastures up to 14,520 feet above sea level. Its long coat and dense undercoat, and it specialized hooves make it highly adapted to its life on the mountain slopes of the Himalayas.