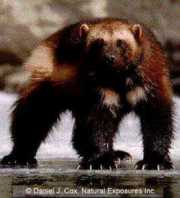 The Taiga Biome is populated with special animals that all have techniques of keeping warm and dry or away from the harsh coldness of the Taiga. One animal of the Taiga is the wolverine.

The wolverine is a meat eating animal, or carnivore. It's body length can get up to 87 centimeters as an adult and weigh about 45 lbs. It looks sort of like a bear, with short legs, but it is the largest member of the weasel family. The wolverine is powerfully built and is well adapted to living in the cold. It has very strong jaws that can bite through frozen meat and bone. Its head is wide and kind of rounded, with small eyes and small round ears. Its paws are very large with long claws. The wolverine's fur is thick and a glossy dark brown.

It is known for it's physical strength and sharp, accurate hunting skills. It ranges from western United States, through Canada, up to Alaska. Wolverines have a very keen sense of smell that helps it locate food. It feeds mostly on rodents, fish, reptiles, birds, carrion, and sometimes berries. It's habitat is in the boreal forests of the northern North American continent.

During breeding season the males usually stay close to the female, but they prefers to travel alone. The females give birth to about 2 to 3 kits in March. The kits are born furry and their eyes are closed. They are weaned in about 9 to 10 months. They reach adult size by early winter but may stay with their mother until they are old enough to reproduce.

The wolverines need a large home territory of about 200 square miles. They need lots of shelters in rock crevices and among boulders to hole up during bad weather or to escape predators. Its huge, flat feet and long claws make the wolverine an excellent climber. Their feet also act as snowshoes and keep them from sinking into deep snow.

The wolverine is a shy animal that tries to avoid contact with humans. Human settlements and low birth rates have decreased the wolverine populations in North America. Wolverines are considered a rare and vulnerable species.