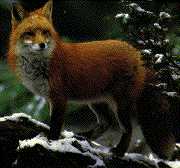 Another common animal in the Taiga Biome is the red fox. It can grow up to 2 1/2 feet long, 15 to 16 inches tall at the shoulders, and weigh 10 to 12 pounds. It has a rusty-red fur, a white-tipped bushy tail and black legs, ears and nose. The nose is pointed, and the ears are wide and in the shape of a triangle.

The female, or vixen, has from 4 to 10 pups early in the spring. The male, or dog fox, will stay around and feed the vixen while she nurses the pups. He will help with teaching them to hunt for a few weeks until they are independent. If the vixen is killed while the pups are young, the dog fox will raise them himself.

The red fox usually rests in a burrow during the day that was recently abandoned by larger creatures such as a badger. It ranges from northern America, Canada, Alaska, and northern Europe across to the Pacific Ocean. It's habitat is in the woodlands, forests, and open country.

The red fox is classified as a nuisance by some because it attacks and eats farm animals like chickens and ducks. They are often purposely shot and killed by farmers. They are not endangered.