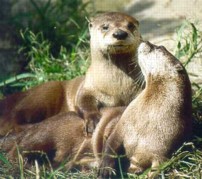 One of the animals that can be found in the North American Taiga is the river otter. The Taiga is an area that is rocky, a bit icy, and has lots of pine trees. The climate is cold, rainy, and snowy. There isn't much sunshine. In addition, there are many varied species of plants. River otters inhabit areas that have thick woods, lakes, swamps, rocks, and logs near grassy areas, streams, rivers, ponds, and mostly fresh water. River otters can be found from 45° to 66° north latitude and from 120° to 139° west longitude.

The river otter is 25-30 inches long from head to body, and its tail is 16-18 inches long. They weigh about 10-33 pounds. They have a long, slender, and sleek body with a tapered tail. They have a coat that is about 2.5 inches thick. River otters have two different types of fur: they have an outer coat of guard that protect their other set of fur which is an inner coat of short, dense fur. The river otter has a dark brown back and can be either light brown or gray on the stomach. The shape of its head is small, round, and flattened. Their eyes are and are located near the top of the skull to give them the ability to see above water while swimming underwater. The ears are very small. The nose pad is large and the snout (which is the muzzle) is rounded with very long whiskers. The nostrils of a river otter are located at the top of the nose to enable it to breathe while most of its body is submerged. When the river otter dives into the water, their nostrils automatically shut. Its whiskers are very sensitive and pick up the vibrations underwater. The river otter has four webbed feet to give it forward thrust when swimming. Also, they have short, strong legs. When it swims, the river otter moves slowly when above water, but when it's underwater, it twists and turns.

The river otter reaches sexual maturity by age two. They mate between February and march. The gestation period is 62-63 days. The female usually bears two kits. The kits are about four to five ounces. When a river otter is born, it is blind and toothless which makes it helpless. The abilities that it has are they take their first steps at seven weeks. The birth of a kit is sometime between January and May. Most of the time, the female raises her young. Kits usually have to ride on their mother's back while swimming. Kits are also taught to swim. Soon the young ones will get used to the water and become great swimming hunters (they are able to catch fish at 16 weeks). The birth interval is one year. The river otter is mainly a social animal. It doesn't migrate. A river is nocturnal and only hunt in the early morning and evening.

A river otter is an omnivore. Its typical diet is fish, shellfish, crustaceans, snails, beetles, amphibians, and other small mammals. It's known to be hunted by foxes and wolves. The river otter benefits from its environment using different advantages to avoid danger. It has adaptations such as, the guard hairs to keep it from freezing and using permeable scent glands to mark territory, identify or for defense kind of like a skunk.

Today the river otter status is vulnerable. It is endangered in the U.S., but is common in Canada. The river otter can be used as a "symbol of survival for wetlands". Pollution is usually found first in the water, wetlands, and small fish. A river otter can't live where fish aren't healthy and they can't live in polluted waters. If otters are healthy, we can assume there is a safe environment for us as well as them.