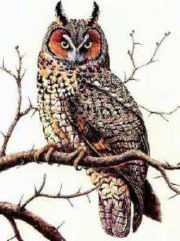 The Long-Eared Owl is a medium sized owl which is approximately 35 centimeters long (around 13 inches) and weighs 8-10 ounces. It is called long eared because of the tuft of feather on its head that look like ears. They do have ears, one which is fifty percent larger than the other and is higher up on the head. This helps them to hear in a special three dimensional way, that helps them to be able to hunt better in the dark. They have yellow eyes, black bills, and a very dark colored throat. They have a round face that is flat. Their face always looks very serious. Their wingspan is 37-40 inches long. They have strong talons for hunting. They turn their head from side to side and can even turn them so far that they can see behind themselves. This turning helps them to hear better when they are looking for food. They feed mostly on voles and other small rodents.

The Long-Eared Owl lives in the Boreal forests, or Taiga, from Southern Canada to the middle part of the United States. It sometimes migrates to Mexico in the winter but some do not. It is also found in many parts of Europe, Asia. It lives mostly in woodlands and fields but they do not often go deep into the forest. The Long Eared Owl will move into a nest which was abandoned by other large birds. It will lay several eggs, up to seven. Once they are hatched, the owl will raise them for up to sixty days before the young are left on their own. They are nocturnal which means they are awake at night and roost, or are asleep in the daytime.

The Long-Eared Owl's special hearing allows it to "see" its prey in the dark which makes night hunting more possible. It flies low to the ground so it is easy to drop on its prey.

The Long-Eared Owl is mainly a predator and they are not at the moment on the endangered species list. But they are on the State of Connecticut's endangered list because of loss of habitat. This happens when houses and roads are built where once the Long-Eared Owl hunted. They are also listed as a species of special concern by the Department of Fish, Wildlife and Parks for the same reason. They rarely come near people except in bad weather when they may come to a garden to hunt mice and small birds. This makes it hard for them to adapt to living together with people.