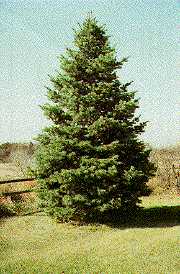 The White Fir is 60-100 feet tall and can live up to 300 years making it a very large forest tree. The leaves are 2 to 3 inches long and slightly flattened. They are silvery blue to silvery green, curve up from the stem and are soft to the touch. The cones are 2-5 inches long colored an olive green to purple color. They grow upright in the top of the tree. The bark is described as being thin. The bark is ashy gray with resin blisters.You can find the White Fir in most of the western regions of North America. It is the only native fir of the North American Taiga.

The most used part of the White fir is the wood, which is used as lumber. The tree is also often used as a Christmas tree. It smells great and has sturdy branches, which hold their shape well. Squirrels enjoy the White Firs seeds. Porcupines like to gnaw on the White Fir's bark. The tree is also a great home for the grouse. In the winter it makes a great roosting place and they can feed off of the buds and needles.