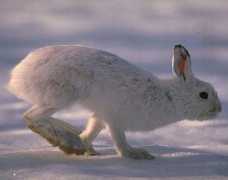 The snow shoe rabbit lives in forest areas where the ground is covered with undergrowth in the higher parts of North America. It migrates throughout the mid west United States as well. It is larger than other rabbits and it weighs around three to four pounds as an adult and can be fifteen to twenty inches. It has large rear feet and the toes can spread out to act like snowshoes. Their feet also have fur on the bottom, which protects them from the cold and gives them traction in the snow. In the summer its fur is rusty, grayish brown but is turns pure white in the winter, except for its eyelids and the tips of their ears. This helps it to hide from predators.

They have three to four litters a year with one to eight in each litter.

The Snowshoe Rabbit can run up to 27 mph and jump 10 feet in one hop. It is an expert at escaping predators like the wolf, bobcat, or lynx. When a predator chases it, the rabbit will quickly change direction. They are also good swimmers and will jump in the water to make an escape.

The Snowshoe Hare is a herbivore that likes to eat grass, clover and other greens in the summer, and bark, twigs and buds in the winter. Since they are herbivores they are mainly prey. The Snowshoe Hare is not considered endangered but their populations have been studied since the 1800's.