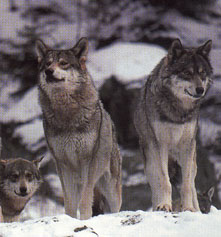 Gray wolves can survive in many biomes as long as food is plentiful and the climate is relatively cold. The Siberian Taiga, one of the habitats they are best suited to, is a boreal forest with long, cold winters and short summers. It covers part of northern Russia, the place where wolves are most plentiful. All wolf packs defend a territory, which can greatly vary in size.

The gray wolf is the largest wild canine. They are around 3 feet tall at the shoulder and are about 3 to 5 feet in length from nose to tail tip. Their weight ranges from 40 to 176 pounds. Male wolves are larger than females. Gray wolves have long legs with large paws. Their tails are long and bushy. They have pointed ears and yellow brown eyes. Their rough coats can be varying shades of gray, brown, white, or black, but in Europe can be grayish brown.

The gray wolf has many special adaptations. Their coats are made up of wooly fur to provide insulation and long guard hairs to keep out moisture. The gray wolf's large paws have fleshy pads and claws for traction and can spread to provide better support in snow. Wolves have a sense of hearing twenty times sharper than a human's and have a sense of smell a hundred times keener. The wolf's jaws can deliver a crushing pressure of over 500 pounds per square inch! Wolves' vision is very motion sensitive. They have a reflective retina, called a tapetum that enhances their night vision. They can't see color. Wolves have great stamina. They can cover a distance of more than eighteen miles at a quick trot. They have a top speed of about 40 miles per hour.

The maximum lifespan of a wolf is 17 years. Wolves reach sexual maturity at 1 year for females and 2 years for males. Wolves typically mate once every year between January and March. They have a gestation period of about 63 days. The average litter size is 5 or 6, born in a den, such as a rock cavity or a hole in the ground. Wolf pups have a birth weight of about 1 pound. They stay with their mother in the den for 8 weeks before they are weaned. During that time the other wolves bring food for the mother. Wolves are very social animals. They live in groups called packs. A typical pack is lead by an alpha male and female wolf, which are a breeding pair. The other members of the group are their current offspring and young wolves who are the previous year's litter. There may also be some lower ranking adults. Packs can have as few wolves as 4 or as many as 30. There are also many lone wolves. The largest wolf pack ever recorded was made up of 36 members!

Wolves are carnivores. They eat animals like moose, caribou, and other deer-like animals. When food is scarce, they will eat rodents. They also scavenge. A wolf can eat 22 pounds of meat at one meal. The pack members will track down a herd and select an old, sick, or young animal. They generally use their stamina to wear down prey in long pursuit, but will also sprint to catch it. The predatory success of wolves is mainly due to the flexibility of their hunting methods. They will flush out their prey, stalk it, or use trickery. No humans have ever been killed by healthy wolves in North America.

The wolf is at the top of the food chain and has no natural enemies. Their only threat is humans. Wolves help keep the ecosystem's population in check by preying on the weak animals so there will be food for the stronger individuals.

In Canada and Alaska, the gray wolf population is stable. In most of North America, however, they are an endangered species. In Europe, Asia, and Africa, the remaining wolf populations are tiny. The largest wolf population in Europe and Asia is found in Russia, which includes the Siberian Taiga.