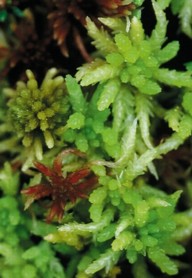 Peat moss is a dead form of Sphagnum moss that grows in the North American taiga. It is the early stage of coal and can hold up to twenty times its dry weight in water, in just its stem and leaf cells! It also has no true root system, and is part dead and part alive.

Peat moss is mainly found in bogs in the North American taiga. The North American taiga is also known as the boreal forest. It covers areas in Canada and the northern part of the United States. The taiga spans from a latitude of 58° to 63° North. Its longitude is 50° to 160° West. The taiga has a winter that is 7-8 months long and a summer that is 2-3 months long. During the winter temperatures range from -65° F to 30° F. In the summer the low is 20° F and the high is 70° F. For six months of the year the taiga is below freezing.

The average rainfall in the taiga is 12-33 inches a year. Peat moss grows in wet swampy bogs. It likes cold temperatures, even below freezing.

Peat moss can grow up to 50 centimeters tall. Peat moss grows the most during summer months. It grows close together and forms a thick mat. Its leaves are spear or cup shaped some are thick and swollen with water others are thinner. Leaves can be clear, green, reddish, or yellowish. Peat moss has no flowers or roots.

Instead of roots peat moss has large dead cells in its stem and leaves that can hold 20 times its dry weight in water. Calcium and magnesium are absorbed by its cell walls from rainwater. Peat moss takes in more nutrients than it needs, leaving the rest of the bog with little nutrients. So it is hard for other plants to grow in bogs. Peat moss also gets nutrients from photosynthesis.

Peat moss can reproduce in two ways. It reproduces by forming capsules filled with spores. In dry conditions these capsules burst and the spores are spread. New plants can grow from the spread spores. Peat moss can also reproduce by growing from broken off pieces of bigger plants.

Peat moss adapts to its environment by creating its own habitat. It holds rainwater so it cannot drain and that creates a bog. Peat moss is not endangered because it can grow in a variety of places and does not need to have a lot of water to survive. Peat moss is also dead and alive at the same time. It is alive on the top but on the bottom, under the water, it is dead because there is so little light and it is even partially decayed.

Peat moss is an early stage of coal, but peat transforming into coal can take up to 400 million years. If peat moss is covered with thick sediments and is not disturbed for millions of years the moisture is squeezed out and the peat gets hard. The hardened peat changes into lignite, which is the softest form of coal. After a hundred million years or more if the lignite is still not touched and is still being pressed down by more sediments, it changes again, this time into bituminous coal. Bituminous coal is soft and black it is the most common coal in the United States of America. After even more time being pressed down by sentiments the bituminous coal changes into anthracite. Anthracite is really hard and gives off very little smoke when it is burned. Anthracite is an extremely rare form of coal; anthracite is often buried extremely deep into the ground so it is hard to mine.

Peat moss is an important plant in agriculture. It's often added to soil to help hold moisture around plants. Peat moss is also important in nature, without it there would be no bogs or coal.