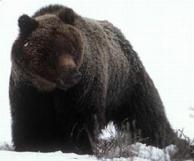 The Grizzly Bear is a sub-species of the Brown Bear. The only distinctions are that the Grizzly Bear has a silverish shine to its fur, and a strange shoulder hump that all other bears don't have.

Grizzly Bears have omnivore teeth which lack carnassial or shearing teeth. They instead have molars to grind up plants, which make up a great portion of their diet.

Their body is stout and heavy with very muscular legs, which allows them to reach speeds of up to 35 miles per hour for a short distance. Another interesting thing is that they walk with a "heel toe" pattern like humans. Their heads are large and round with a dished nose, and small round ears.

A Grizzly Bear's coat has many color phases that include the following: black, cinnamon, red, blonde, brown or mixes of these colors. Their coat is very shaggy which helps get it through the winter. The brown bear weighs from 330 pounds to 885 pounds and its common length is 4.9 to 8.3 feet. It is usually 3 to 3.5 feet high. Their normal claw length is 3 _ to 4 _ inches long; it is curved and highly useful in climbing trees.

The Grizzly Bear reaches sexual maturity 2-3 years after birth, and its mating season is in the spring to early summer. It gives birth to usually 1-4 young that weigh 1 pound when born. These cubs suckle until April or May, then they are able to follow their mom on hunting trips. The following spring the mother leaves the cubs to mate again. Only the mother raises the cubs, the father leaves after mating. The Grizzly Bear lives up to 25 years, and mates every 2-3 years.

The sharp claws this bear has helps it to dig for its food, and its coat helps it survive long winters in the mountains. Then, before winter, it fattens itself up, and hibernates in caves until late winter or early spring.

The Grizzly Bear eats 200 different kinds of plants that make up 75% of its diet. The other 25% of their diet is made up of, insects, honey, small rodents, mammals, and carcasses. Like all bears it is an omnivore.

The Grizzly Bear is a predator. It helps the environment by reducing the weak and elderly deer population when there are too many.

The Grizzly Bear is endangered in all the U.S. except in Alaska. The U.S. Fish and Wildlife Service are making bear sanctuaries such as Yellowstone State Park.