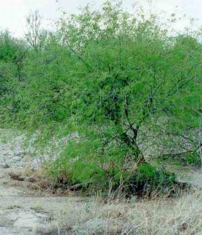 Velvet mesquite is one of the most common, and important plants of the southwestern deserts of the North American continent. It is useful to humans and essential to the survival of wildlife in the desert. Birds, insects, and mammals eat the beans, seek shelter under its canopy, and benefit from the leaf litter and nutrient rich soil under the tree.

It grows at elevations below 4,000 to 5,000 feet in desert washes and grasslands. It is the dominant tree species along streams and river beds. There the velvet mesquite forms dense thickets and woodlands, or bosques, from the Spanish word for forests. Velvet mesquite ranges from central and southern Arizona, extreme southwestern New Mexico, and adjacent northern Mexico. It can be found growing in the Chihuahua, Sonoran, and Mojave deserts. The only desert it doesn't occur in is the Great Basin Desert because the temperatures are too cold.

There are three common species of mesquite; the honey mesquite (Prosopis glandulosa), screwbean mesquite (Prosopis pubescens), and velvet mesquite. The velvet mesquite is the largest of the mesquite species. It is a low-branched, broad spreading thorny shrub or small tree with a well-developed crown. It can grow as a single-trunked tree about 30 feet tall, and just as wide, with a two feet diameter trunk. When young growth is damaged by frost, fire, or browsing, it will sprout multiple trunks from dormant buds on its stem under the ground and form a shrub.

The bark of velvet mesquite is reddish-brown and smooth when young. On older trees the bark becomes gray-brown, rough, thick, and shredded into long, narrow strips. Young, green branches grow in a zig-zag pattern and may be photosynthetic. Two inch-long yellow thorns grow in pairs at the base of each leaf on the young branches.

Leaves grow alternately on the branch. The leaves themselves are bipinnate, compound, about 3-6 inches long, and pointed. The leaf has two sets of compound leaves, usually with four major leaflets and 10-20 narrow minor leaflets 1/3 to 1/2 inch long, which grow opposite each other on the stem. The leaves are dark to dusky green with a gray, hairy surface and paler undersides.

The flowers are yellow-green, drooping catkins about 2-3 inches long. The flowers have bell-shaped calyces, and 5 petals. The flowers are tiny, but there are hundreds in a catkin. The velvet mesquite is pollinated by insects. The seeds are contained in straight or slightly curved, flat seed pods about 3-8 inches long. They grow singly, or in drooping clusters. Seed pods are straw colored, and are covered in short, velvety hairs when young. They mature 7-9 weeks after flowering. In Arizona they mature in July and drop in September. The beans are sweet to the taste. The seed pods are a nutritious source for wild life. Wild turkeys, ground squirrels, jackrabbits, woodrats, javelinas, coyotes and mule deer all benefit from the leaves, flowers and seeds of the velvet mesquite. Studies have shown that when available, 80% of a coyotes diet is made up of mesquite pods. 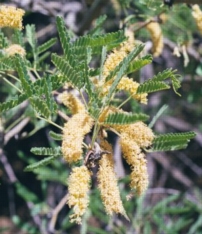 Mesquite are members of the legume, or Fabaceae family. Like most legumes they restore nitrogen to the soil. Nitrogen-fixing bacteria in the soil form a mutualistic relationship with nodules on the mesquite's roots, which frees nitrogen for plant consumption.

The velvet mesquite is winter deciduous. This means it loses its leaves during the winter months of December through February. Because of its large root system it can keep most of its leaves through summer drought periods. In warmer regions the leaves stay on until just before new leaves grow in the spring.

Velvet mesquite has a massive root system which can grow down as far as 50 feet to reach the water table. The taproot can be as big around as the trunk itself. A second, lateral root system, spreads out beyond the crown 6-12 inches below the soil surface to catch and absorb any rain that may fall. Small pinnate leaves reduce the surface area exposed to damaging ultraviolet rays from the sun. Small fuzzy hairs on the leaves and young pods deflect the sun's rays, and further protect them. Large thorns on young branches protect the tree from over eager browsers.

Mesquite, along with desert ironwoods are considered to be "nurse trees" to other desert plants like the saguaro, organ pipe cactus, and may succulents and forbs. Its nitrogen-rich soil feeds young seedlings while the canopy provides shelter and shade. Its foliage provides cover for large animals like javelinas and mule deer as well. Many species of rodents dig their burrows under the mesquite tree. The temperature under the tree can be 15° F cooler than the surrounding desert. 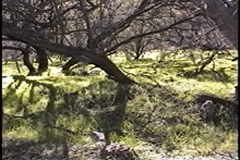 Native Americans used mesquite pods as a staple food. They made tea, syrup, and ground meal called pinole from various parts of the tree. Mesquite bark was used to make baskets, fabrics and medicine. The wood of the mesquite tree burns slowly and is used as firewood, and to make an aromatic charcoal for barbecuing.

The velvet mesquite is abundant in its habitat, although mesquite bosques are in decline because of falling water tables and invasion by tamarisk trees. The shrubby form of mesquite has been invading grasslands throughout the southwest. Velvet mesquite is a tough desert plant, well adapted to the harsh conditions of its desert habitat.