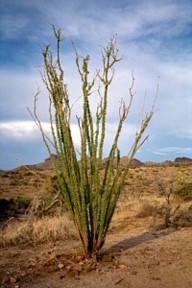 The Ocotillo has many interesting names such as Candlewood, Slimwood, Coachwhip, Vine Cactus, Flaming Sword and Jacob's Staff. The Ocotillo is indigenous to the Sonoran Desert, which is located in the Southwestern United States and Northern Mexico at latitude is 23° to 33° North and longitude 107° to 112° West.

The terrain of the desert is open and very rocky, and its soil is well drained. The elevation of the Sonoran Desert is about 5,000 feet. The average yearly temperature is 90° F, and the average yearly precipitation is less then 10 inches.

There are many plants indigenous to Sonoran Desert; one of interest is the Ocotillo, or Vine Cactus. The Ocotillo prefers to grow in the Sonoran and Chihuahuan Deserts of Southeast California to West Texas and south into Mexico.

The Ocotillo is abundant in the Southwest because the soil is well drained on rocky slopes, mesas, out washed plains and desert grasslands. The ocotillo is deciduous, drought tolerant shrub. From its root crown it grows stems that can be any where from 9 to 30 feet tall. These stems grow in an "S" like pattern making the shrub look like an inverted funnel. The stems are covered with spines that can be 1.5 inches long. The leaves of the shrub are thick and leather like and grow several times in the growing season depending on the amount of rainwater available. The leaves are narrow 2-inch ovals, which can sprout within 3 day of a rainfall. The leaves turn brown and fall off when water is scarce. When the leaves die the stalk and part of the steam become woody and form spines. In the spring the Ocotillo produces flowers, which are tube like and bright red. The flowers are 1/2 to 1 inch in size with 5 lobes curled into 10-inch clusters. They can be seen from March to June and even later depending on rainfall. The Ocotillo can be leafless for a long time, because the roots are deep and do not get much water. 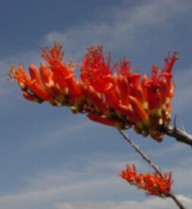 The Ocotillo is pollinates by hummingbirds that like the honey nectar it produces. They feed on the flowers during their travel north from Mexico to the mountains of the Western US.

The Ocotillo is very plentiful and not endangered because it's the only Fonquieria to be cultivated. The plant is easily grown from seed and cuttings and sold as nursery stock. The shrub is often use as "fencing" because its spines stop people and animals from passing through. The Ocotillo can be planted at anytime of the year.

The Ocotillo is a desert success story. It is a plant that has adapted to its environment, and it is useful to both animals and mankind.