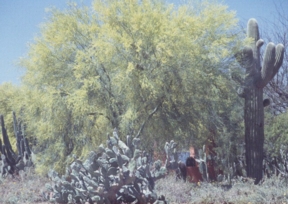 The yellow palo verde is a very strange looking shrub or small tree which grows in the Sonoran Desert of the southwestern United States and northern Mexico. It has adapted in unique ways to survive the killing heat of the desert sun.

Palo verde, or "green wood" in Spanish, has a thin, almost waxy looking green bark studded with large of thorns. The smooth greenish trunk and branches have for a large part taken over the photosynthesis. The green bark contains chlorophyll, which gives it the ability to carry on photosynthesis when the tree has shed its leave during dry, hot periods. This way the tree doesn't have to shut down completely and can still store up energy in its roots. The tree has a very deep root system to access any underground water supply. Palo verdes are "branch deciduous", meaning theat they may shed some of their branches during severe droughts, becoming a smaller tree.

The palo verde has low hanging, dense and twiggy branches and a strange irregular shape. Six to four major stems sprout out about 8 inches (20 cm) from the ground. The crown is 12 to 18 feet (3.7 - 5.5 m) wide. Palo verde can get to be 10-20 feet tall, but grow very slowly and are considered climax species in the Sonoran Desert.

Its leaves are compound and pinnate, and about 1 inch (2.5 cm) long, with tiny, round leaflets. The palo verde is drought deciduous, and drops its leave during dry, hot periods. This is an adaptation that prevents water loss through transpiration for some desert plants.

The flowers of the palo verde are 1 inch solitary blooms that flower in late spring. The small, pale yellow flowers grow on the edge of a branch, and are pollinated by insects. They may not flower every year, depending on the rainfall.

The one to five seeds are contained in 2 to 3 inch (4-8 cm) long pods which pinch in between each seed. Seeds are produced when the spring has been wet and cool. They ripen in July, and cling to the branches. Rodents will often cache the seeds underground, where some of them will germinate after a rainy season. The seedlings are very sensitive to drought for the first two to three months of their lives, and only about 1.6% will survive after germinating. Those that do survive usually have germinated under triangle bursage.

The palo verde is a very important tree in the Sonoran Desert ecosystem. The black-tailed gnatcatchers use the palo verde as nesting sites, and the Gambell's quail use them as roosts. White-throated woodrats also use them for shelter. Desert bighorn sheep, mule deer, jackrabbits and other rodents browse on its leaves. Javelinas like to eat the seed pods. The canopy cover reduces the temperature below the palo verde which is very important for the germination of other desert plants. The palo verde is the primary nurse plant for the saguaro cactus.

Palo verdes grow in arid to semiarid climates with mild winters and hot summers, and two distinct rainy seasons. They are found on gradual to steep lower mountain slopes and alluvial outwash plains at altitudes of 1,000 to 4,000 feet (305-1,219 m). They are the dominant species of the Arizona Uplands of the Sonoran Desert.

The seeds can be ground up and used for flour. The Seri Indians of northern Mexico used the seeds and flowers as a food source, and made necklaces out of the seeds. Red dye can be made from the flowers. Palo verde wood is only good for fire wood, and the tree is not an endangered species.