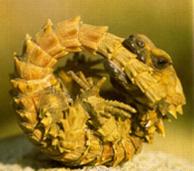 The body length is 15-17 inches, the tail is 14-16 inches long, and it weighs 8-17 lbs. Its back legs are a little shorter than the front. The head, body, and club-like tail are all flattened, enabling it to wriggle easily into rock crevices for shelter. It may also adopt a curious defensive posture when threatened by rolling itself up like an Armadillo, with its tail tightly held in its jaws, presenting a spiny ring to the predator and protecting the softer, vulnerable belly area. That's why its called the Armadillo Lizard. The armored Armadillo Lizard has protection all around its body so that predators can't harm any of its under parts. Also squeeze into small places for escape. Another protection is their spiny scales that go all the way around its body. Their tails and spines also can be used to defend themselves as well. The Armadillo Lizard can be found in the deserts of the southern tip of Africa.

The Armadillo Lizard has its babies in the late summer. Only 1 or 2 babies are born during that time. The Armadillo Lizards stay in family groups, and they will all live in the same rock crevice. When the lizards give birth, the babies are live-born, but do have a thin membranous shell that they need to break through.

"Lizards of the World; Armadillo.", http://www.discovery.com/exp/lizards/low_armadillo.html