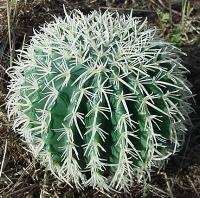 When you imagine a desert, what do you think of first? Maybe it's sand, heat, or Gila monsters, but most likely it's cactus. Cacti are probably the most memorable characteristic of the desert. In all of the Speedy Gonzales cartoons, Speedy is always leading his unsuspecting predators into a cactus. And what is in the background as Wily Coyote accidentally blows himself up with Acme dynamite? Cacti of course!

American deserts is the barrel cactus. The Barrel cactus can be easily distinguished from other cacti because of it cylinder-shaped body. The cactus usually reaches from around five to eleven feet tall, and at that height it is one of the largest cacti in the North American deserts. This cactus is really a man-sized (or bigger) cylinder with numerous parallel ridges that run down the sides. These ridges are topped with dangerously sharp 3-4 inch spines. The barrel cactus is also a flowering plant. It has rings of yellow-green or red blossoms at its top.

Like many plants of the world, this cactus has numerous uses. Native Americans who lived in the desert found the barrel cactus very useful. In the vast untamed land and scorching heat, you couldn't really hop in your air-conditioned car and cruise down to the local A&P. The Native Americans had to look hard to find food. The barrel cactus provided some very important provisions for them. They stewed the Barrel Cactus to make a cabbage-like food. They got water to drink from the pulp and they made fish hooks from the spines, which are pointed at the end. The pulp is also made into "cactus candy".

The Barrel cactus is found in the Mojave, Sonora, and the Chihuahua deserts. These deserts are found in the land of Speedy and the Roadrunner: Baja, Arizona, California, Texas, and Central Mexico. The barrel cactus grows in the desert washes and slopes, but can also be spotted growing along canyon walls.

The barrel cactus is my favorite of all the cacti because it is very beautiful, but can really make you sore if you step too close. So keep an eye out for this cactus if you're anywhere in the vicinity of the southwest part of America. Just think, if you are ever stuck in the desert, you know what plant to boil for dinner.