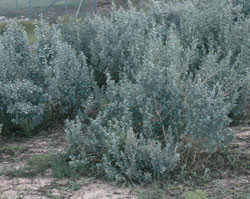 The common saltbush is often mistaken for "sagebrush". It is actually related to the "tumbleweed", or Russian thistle and is part of the "goosefoot" or "pigweed" family. Other members of this family considered weeds include arrowweed and kochia. Spinach, Swiss chard and sugar beets are actually cultivated members of the same family.

Common saltbush is a grayish-white shrub that grows to be about 2 to 3 feet tall. It has many branches sprouting from the base of the plant. They aren't very pretty to look at, but they are very well adapted to living in dry, alkaline environments, such as the Mojave desert. The stems and leaves are covered with small white scales called scurf, that help the plant conserve water. As a matter of fact, the common saltbush doesn't like lots of water. The leaves are sharp spines alternately clustered around the stem of the plant. In extreme droughts it will drop all of its leaves.

Atriplexes have yellow flowers which grow directly from the stem. A cup is formed by five fused sepals, with five stamens rising from the center. While the male flower is tiny, the female flowers grow in long open clusters two to sixteen inches long. They bloom from the middle of spring to the middle of summer.

Common saltbush is sometimes called "cattle spinach". It is very important as a browse plant for cattle and sheep because it is a great source of minerals, especially salt, which they need. This plant is a good source of food and shelter for many desert animals. Barn Owls and Northern Harriers use its branches to perch on. Pronghorn, deer, and many desert rodents eat the leaves.

The Pima Indians used to eat the seeds. Native Americans of the Southwest cooked the seeds of the four-wing saltbush like oatmeal, and they would eat the leaves either raw or cooked. The plant is rich in niacin, so it was very important to their diet. Navajos made the twigs and leaves into a yellow dye.

The common saltbush grows in cold desert shrub and salt desert shrub habitats with gravelly or sandy soils. It is a dominant plant in the Mojave desert.