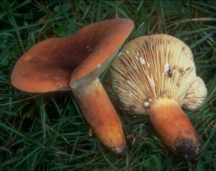 The Tawny Milkcap Mushroom can be found in most deciduous forests. On the North American continent it can be found in southern Canada and the eastern United States. It is also common in Europe. In Japan it is known as chichitake and is used to make a flavorful broth.

If you are a mushroom hunter, you may like to eat the Twany Milkcap. This species is edible and is a favorite of collectors. It is best eaten fresh because a white "milk", or sticky latex, seeps out and turns brown when the gills are cut, giving it the name Twany Milkcap. It has a strong fish-like odor, especially when dry. Their flavor is mild, however.

The Twany Milkcap's cap is 2 to 5 inches wide, and smooth with a dry, velvety feel to it. The upper part is orange-brown in color. The edges of the mushroom cap turn up and becomes bowl shaped, making it look like and inside out umbrella. When they are young they have a darker, russet color, and turn almost pale yellow as they get older. The gills are close together and are almost white. They bruise easily and turn brown where you touch them. The stalk can be up to four inches tall and is also orange but it has darker streaks in it.

Tawny Milkcap Mushrooms are neither plants nor animals. They belong to the Fungi Kingdom, and like most fungi they are decomposers. This means they break down dead organisms, and get all their food from other organisms.The mushroom we see growing above the ground is the fruiting and reproductive part of the fungus that lives mainly underground, called the mycelia. The mycelia are long, white, branching hairlike filaments that grow very quickly through the leaf litter. The mycelia send out a chemical that helps break wood down into nutrients. The decomposing mushroom keeps leaf litter from accumulating. Without decomposers the world would be buried under a mountain of waste. Because mushrooms don't have chlorophyll, and get their nutrients in other ways, they don't need light to grow.

The above ground mushroom part produces spores between the gills which, when released, find a moist area and germinate. The germinated spores sprout mycelia. The mycelia grow quickly, searching for nutrients and water. When they find a good place the begin reproducing, they make special reproductive cells which grow into tiny mushrooms. Spores can travel by wind and different animals. Insects are attracted to mushrooms by their smell and carry spores to different places. Animals, including people, eat mushrooms and their spores. This doesn't hurt the spores, which are deposited in a nice, nutrient rich, wet and warm package to start reproducing again.