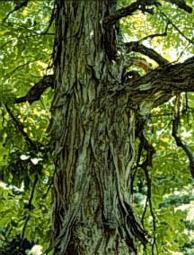 The Shagbarks leaves are compound and alternate, with five or seven broad, toothed leaflets. The leaflets can be smooth or hairy and can be up to 10 inches long and 5 inches broad. The twigs bear brown buds. The nuts have thick husks, but the shell inside is thin and is edible with a sweet taste.

The Shagbark hickory tree usually grows among oak trees. It grows in wet and dry areas, but grows better in well-drained soils.

The Shagbark Hickory tree has long taprooms which grow straight down into the ground to help the tree get extra water if there is a drought. These roots will be helpful to the life of the tree.