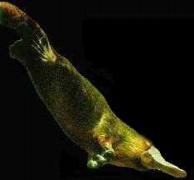 The duckbill platypus lives in the deciduous forests of Australia. It is about half the size of a house cat. It has a thick covering of hair except for its bill and feet. Its back is a dark brown and has light yellow on its stomach . The tail has fatty tissue which is used to store energy. The body is streamlined and flat. It has short legs and webbed front feet. The back feet are partially webbed. Their feet have broad nails for digging. Males have hollow spurs on their ankles which carry venom. They use this venom as protection. It has a bill shaped like a duck's bill. This bill is sensitive to touch. It is flat, soft and rubbery with many nerves. The bill has nostrils for breathing that can be closed when they go under water. When you look at a picture of a platypus, the eyes look about the size of a dime. The platypus does not have teeth, so it grinds its food with grinding pads in its mouth. The eyes are just behind their bill. The ear slits are behind the eyes. It can make sounds such as a growl, and a clucking noise. It weighs between 1 1/2 and 5 1/2 pounds. It is from 26 inches to 39 inches long. It can walk or swim.

The platypus is a monotreme and is one of three mammals that lay eggs. It reaches sexual maturity at two years. They mate between August and October. The female lays eggs 2 weeks after mating. The eggs are incubated for 10-14 days. There are usually two babies in each clutch. The female nurses her young until it can get food for itself. It leaves its mother's burrow at 17 weeks of life. The babies live with their mother while they are being raised. The father does not help raise the young platypus. Adults live by themselves and each one has its own territory. If the territory gets too crowded, the juvenile finds a new territory and settles in. The platypus can live up to 15 years.

The platypus uses many things to survive in its environment such as webbed feet and a flat tail used to swim. Thick fur keeps them dry and warm. Their tails store fat for energy, and broad nails help them for digging and walking. Their bill has electroreceptors which are used to find its prey. Venom can be injected into a predator and is strong enough to cause a lot of pain in a human, and could kill a dog. Scientists think it is used for fighting other males for females.

The platypus eats early in the morning and in the evening. As a carnivore, it eats frog, shrimp, larvae, fish and tadpoles. It dives to the bottom of the river and wiggles its bill in the sand and mud in the bottom. It doesn't use its eyes or ears. There are pits in its bill that detect electrical discharges from its prey and that is how it finds its food. It stores its food in cheek pouches behind its bill until it comes to the surface and then the food is moved forward into its bill. It grinds its food with the pads on the bottom and the top of its bill because it doesn't have teeth.

The platypus lives along streams and river beds. It burrows one entrance underwater and another one above water so that it has two entrances to its burrow. It burrows into riverbanks in the soft mud. It uses its front feet like shovels to dig the burrow.

It was hunted for its fur and persecuted by fishermen. In the past it came close to extinction. Now it has protection by law in the National Parks and Wildlife Act of 1974 (from hunters and fishermen), and the population has grown back to a healthy size. But they aren't safe yet. Today people are destroying their habitats and hopefully something will be done about this problem.