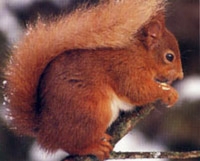 The European red squirrel lives in the European Deciduous Forest. The red squirrel prefers to live in the forest but in some places they live in gardens and parks. The European Deciduous Forest has 4 seasons. It is cold in the winter and very warm in the summer. It spreads from northern Portugal to southern Norway. Eastern Europe is dry. There are not many species of trees in Europe. It rains 30-50 in. a year. The latitudes are 40° to 60° North, and longitudes 5° to 40° East.

The red squirrel, like all squirrels is a rodent. They have strong teeth made to open pinecones and seeds. They have four toes on each foot with long, sharp claws to help it grab bark when climbing trees. They can support their entire weight when climbing. The red squirrel has a long bushy tail used to balance its weight while climbing a tree. The squirrel is about 36.5 cm. (13-18 in.) long, including their tail. They have ginger, red, brown fur over much of their bodies. Most have white fur on their chests. Adult squirrels weigh up to 350 g. (8-16oz.) They have larger ear tufts in the winter which disappear in the summer. To help the red squirrel keep safe in its environment, it climbs quickly. To show the squirrel is mad, it will wave its tail back and forth like a flag.

The European red squirrel reaches maturity at around 9-10 months old. They have 2 litters; one in February and the other in June. Each litter contains around 3 or 4 babies. Baby squirrels weigh 8-12 g. (0.5 oz.) and are blind, deaf and naked at birth. At 4 weeks their eyes and ears open. Squirrels are finally independent by 8 weeks but stay near their mother for a while. They learn what foods they can eat from their mothers. When they get older they don't like to try out new foods. The male doesn't help take care of the babies. The red squirrel lives around 4-6 years. They don't hibernate but will stay in their nests, called dreys, for several days when it gets cold. Red Squirrels are not territorial and their homeranges overlap each other.

The red squirrel mostly feeds on seeds. They consume acorns, hazelnuts, chestnuts and beech flowers. They also eat fungi, berries and caterpillars. In the autumn, squirrels bury seeds and nuts. In the winter if these supplies run out, the squirrel may die.

The European red squirrel's predators are birds of prey, Eurasian wild cats and pine martens. To keep safe, the squirrel climbs to the end of a branch. Since the branch can't hold much weight, the predator leaves. The European red squirrel is mostly a herbivore, but will eat bird eggs and sometimes nestlings. It is important to the environment because it disperses seeds. When it shares its niche with the larger gray squirrel it is usually pushed out.

Although they are common in Central Europe, the European red squirrel has become extinct throughout most of England and Wales and is protected by laws there. They are endangered because they can't compete with the more adaptable gray squirrel which was brought over from North America. In Finland and Russia, red squirrel are trapped for their fur. They are also endangered because their habitats are being destroyed. The only way to keep the red squirrel population up is to lower the gray squirrel's population.