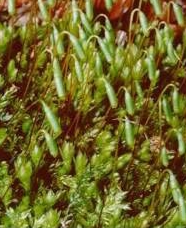 Mosses are simple, rootless evergreen plants. They can live in a wide variety of habitats, but are most often found covering the ground, growing on stream beds, and on the base of trees in deciduous woodlands. Carpet moss grows in eastern North America and Europe.

Carpet Moss, like its name, carpets the ground. In the spring the carpet moss is golden green, and turns dark green as it gets older. It looks almost velvety. Its leaves grow parallel to each other and taper off to a point at the end. The edges of the leaves have long, narrow cells which grow in pairs and make the margins look serrated.

Mosses originated from aquatic plants and still have a lot of things in common with them. Arcticmoss (opens in a new window) actually survives the bitter cold of the arctic by growing under water. They absorb water through pores which always stay open, and require constant moisture. They don't have true roots, stems or leaves. They reproduce through spores and not through seeds.

Carpet moss reproduces both sexually and asexually. When producing sexually, depending on weather conditions, mosses produce small female structures that produce egg cells, or male structures that produce sperm cells. These can grow on different parts of the same plant. The sperms fertilize the eggs and develop into a spore-plant, or sporophyte. The sporophyte begins to grow from the female plant, taking nutrients from its parent because it can't produce its own food. This sporophyte is the long stalk with a small capsule on the end that you often see growing out of carpet moss. The capsules produce the spores. When conditions are dry, the capsules open and release the spores. These spores grow into the leafy male or female mosses.

Moss can also reproduce asexually when bits of stem or leaves are separated from the plant and develop into new plants.

Many people use Carpet Moss as a ground cover in gardening. Many years ago, people used to stuff their beds with Carpet Moss because they thought it made them sleep better.