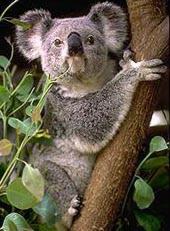 This fuzzy marsupial is very muscular, quite lean, and is about 33 inches long. It has a fuzzy coat of fur, big floppy ears, and almost no tail! It's got a stubby little nose, small yellow, beady eyes, and strong bones to support its heavy body while climbing trees. Now you may wonder; how much do those strong bones have to support? Well, the females weigh between 13.2 and 24.2 lbs., while the male weigh between 17.6 and 30.8 lbs.

The koala has rough paws that act as traction so they don't slip and fall off the trees while hurrying away from predators that lurk beneath the trees. Each paw has 5 digits. The back paw consists of two "fingers" that are joined together to form a "grooming paw". These

help it get rid of off twigs or tics that may have gotten tangled in its thick fur. There are 3 other "fingers". Two of them are very sharp and those are used for climbing. The last "finger" which takes the place of a human thumb is stubbed; there are no claw on it. Meanwhile, the front paw has 2 tiny "fingers" that are substituted for 1 large thumb. It also has 3 normal "fingers" that are very sharp. Just like their back paws, these are used for climbing.

The koala has thick fur that is used to help keep it cool and at the same time warm. Their fur also acts like a rain slicker, repelling moisture. The color of their fur changes from gray to brown depending on the season. They have patches of white on their neck, chest, and inside the ears, legs, and arms.

The koala usually mates during September-March. The female koalas start to mate with the male koalas when they're around 3 or 4 years old! They sometimes only produce one offspring per year. It takes about 35 days after the female koala conceives to birth a Joey (a baby koala). When the Joey's born, it looks like a pink, hairless, jellybean, with beady little eyes just like its parents. Get this; Joey's can't see or hear when they're born. That's probably because they don't even have ears when they're born! The babies are usually only 2 centimeters long and weigh only 1 gram. During the first few months, the Joey stays in its mother's pouch and sucks on something in its mother's nipple called "pap". "Pap" is very mushy, just like baby food. The Joey eats "pap" until it's 1 years old. Then the mother starts to feed it eucalyptus leaves.

Using its brown and gray fur, the koala can camouflage itself so they can hide from predators. Don't you think that the koalas might get hurt sitting on the sharp twigs, well they don't! Their bottoms are padded with so much fur, that they can sit on pointy branches and not get hurt! The koalas thick, fuzzy fur keeps them warm, but not too warm. Their sharp claws dig into the trees so that they don't fall off.

Even with their tiny noses, koalas have an excellent sense of smell. They can detect the poisonous leaves, just by sniffing them!

The koala is killed by foxes, dogs, dingoes, and most of all, humans and forest fires.

The koala used to be endangered, but there are now laws in Australia that forbid you to hunt koalas, especially just for their fur, which is what most people kill them for. Hundreds of koalas die because they have life threatening diseases. Their biggest threat now are slow moving forest fires. There are many organizations around the worldjust for saving the koalas.

The koala, one of Australia's most recognizable animals, is rapidly disappearing throughout much of its range because of the destruction of the woodlands and forests in which it lives. Found in the scattered dry eucalyptus forests of Eastern Australia, the koala eats only a small variety of the hundreds of eucalyptus species, and needs large areas of woodland to forage in.

European settlers arriving in the early 1800s, cleared the forests to build homes, farms, and towns. As the koala was pushed out of its habitat, its populations became scattered or died out. Only 20% of the original koala habitat remains today.

They were also extensively hunted for their soft, gray fur. As late as the 1920s more than 2 million koala skins were exported to Europe and the U.S. a year. The koala had to be reintroduced to South Australia from Victoria after the fur trade wiped out the local population.

Today habitat destruction poses the greatest threat to the koala. Legislation has been passed to protect the koala, but local governments are often unable to enforce the laws successfully. Also, as settlements spread, the danger of forest fires increases. Fires can wipe out 70% of the koalas in an affected area, from which their population seldom recovers.

Roads fragment their habitats and many koalas are killed by cars as they search for new territories. Introduced animals such as foxes, and domestic dogs also account for many deaths. Isolated populations of koalas become succeptable to inbreeding and disease. Fewer than 50,000 koalas are left in the wild

Today the koala's survival depends on the government of Australia to work with conservationists, communities and businesses. There are several organizations which are already providing a lot of information on koalas. The Australian Koala Foundation is educating Australians about the plight of the koala, and the Koala Habitat Atlas, a part of the Australian Koala Foundation, is identifying and assesing remaining koala habitat. Nature reserves are now including larger koala habitats. Public awareness of the plight of the koala is very important to its survival. International recognition of the problem by the IUCN is also helping put pressure on the government and developers. Tourists coming to see the koala are bringing over a billion dollars into Australia.