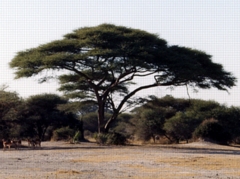 Umbrella Thorn Acacia is one of the most recognizable trees of the African savanna. It grows in sand dunes and rocky grounds of Africa's grasslands. Acacia's grow in areas with annual rainfall as low as 4 cm. This tree can survive in 122° F temperatures during the day, and freezing temperatures at nights. The savanna that the Acacias live in is hot and dry in the respective summer of the Southern Hemisphere, although at night the temperature can go below 0° F. During the winter months the savanna gets a lot of rain.

The Umbrella Thorn grows up to 20 meters high and has a spreading, flat-topped crown that gives it its name. The bark on the Acacia is black to gray in color and feels rough. The branches on the Acacia are gnarled. The Umbrella Thorn has two types of thorns on the branches; long, straight, brownish thorns and shorter, hooked thorns that grow alongside each other. The thorns grow in pairs and disguise themselves in the clusters of flowers that grow on the Acacia. The flower clusters have up to 400 white, puffball flowers that grow on a twig on the Acacia. The Acacia's leaves are composed of small alternate leaflets on a central rib. The acacia's leaves are 2.5 cm long and 1 mm wide. The seeds are 8 to 12 cm long twisted pods. The Acacia's belong to the family "Mimosaceae", and until recently was known as the " Mimosa Tree".

One of the Umbrella Thorn's adaptations to hot and dry conditions is a deep taproot, which can reach 115 ft under the ground. This adaptation helps it get the water during the dry spells. A second set of roots spread out just under the ground about twice the area of the crown. The little leaves of the Umbrella Thorn prevent water loss. The acacia's umbrella-shaped tops enable the tree to capture large amounts of sunlight with the smallest possible leaves. The thorns are used to keep the savanna animals away from eating the leaves, flowers, and seedpods. The only animal that is immune to the thorns is the giraffe.

The Acacia provides shade for the animals of the savanna. The trunk of the tree makes very good charcoal and firewood. The flowers on the Acacia provide a good source of honey in some regions. The stem of the tree is used to treat asthma, and diarrhea. The bark of the acacia is used as a disinfectant, and the pods are used to make porridge.

The Acacia is not endangered, and it is actually plentiful. There are over 700 species of the Acacia in Africa.