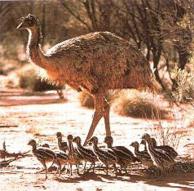 The largest bird that inhabits the lush, grassy fields of Australia is the emu. Adults are about 5.7 ft. tall and weigh about 110-120 lbs. It has medium size wings, but it can't fly! The base feathers are white, while the feathers on the top are blackish brown. The feathers act as a "feathery-quilt" because they're so loosely connected. From a distance they look very course.

The weight of the female emu is 90 lbs., while the male weighs 80 lbs. They only have 3 toes, and they are very sharp, making it easy for them to run really fast. Emu's have long, strong necks, very sharp beaks, and bald, bluish heads.

Emu's usually mates during May-August, beginning when they're almost 18 months old! The female lays around 5-20 eggs in a shallow nest made out of mud, leaves, grass, bark, and twigs. The color of the eggs are greenish-black. When the babies are born, they're beige with dark stripes and little dots on their tiny heads. It takes 2 months for the babies to hatch. During those 2 months, the father sits on the nest, drinking little water and usually losing a total of 10 to 20 lbs. When the chicks hatch, the father emu takes care of them for several months.

The emu used to fly at one time, but lost the ability because they had no predators and didn't need to fly anymore. When the Europeans came, they started to hunt them, but by then the emu couldn't fly.

The emu eats mostly fruits, flowers, insects, seeds, and it absolutely adores caterpillars and green vegetation. Emus need to drink water on a regular basis in order to stay alive.

The emu isn't endangered, but they might be someday. Most of them today are killed by farmers who say that the enormous bird destroy their crops.