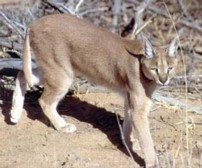 Felis caracal can be found in the Veld Grassland in South Africa, and in central Africa and India from 30° North to 35° South latitude and from 20° East to 25° West longitude. This environment is generally dry and hot. The cat's habitat can also be savannah, scrub and acacia woodlands, or mountains and hilly areas.

Its head/body is 24-36 inches long, and its tail is 9-12 inches long. Its shoulder height is 15-20 inches. Its weight is 28-42 lbs. It has a shape like a cat but it's bigger and has bigger ears. The cat has a short coat whose color varies from tawny-brown to reddish-grey, sometimes even getting as dark as wine-red. Its head is shaped like an upside-down triangle. The ears are black on the outside and pale on the inside, with two-inch tufts of black hair coming out of them. The fur around the eyes is paler than the rest of the coat. The caracal has powerful jaws on a short muzzle. Its claws can retract into its large paws. It is faster than any other cat its size.

The caracal male is sexually mature at 12-15 months of age, and the female at 14-16 months. They mate year-round. Their gestation period is 69-78 days, and they usually have 1 to 6 young. The kittens weigh about 10.5 oz. As soon as they are born, the kittens have bold facial markings. At first, they only eat, sleep and make some noise. Their mother carries the kittens in her mouth by the back of the neck. They play with each other, and they learn to hunt that way. They are independent after about a year, when their mother will have another litter. The male does not help to raise the children; caracals live alone, not in pairs or groups, except when the mother raises the cubs.

The caracal is solitary, and can live as long as 17 years in captivity. They are active at night, mostly hunting smaller mammals, such as rabbits and porcupines, or even larger mammals like sheep, young antelope or deer. They have a special skill at catching birds. Their strong legs enable them to jump high enough to actually bat birds out of the air with their large paws.

The caracal's only predator is man. Humans hunt the caracal for its fur and meat in many places, sometimes to prevent this cat from killing livestock, mostly in Namibia and South Africa. There is no national legislation to protect the caracal. However, in some places these animals are protected legally. Hunting the caracal is forbidden in 10 countries in Africa. Hunting and trade are regulated in 6 countries in Africa. However, in areas where the caracal is not in danger, there are no laws protecting them.