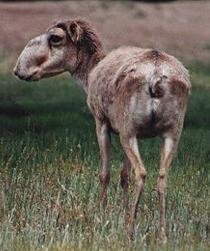 The Saiga antelope once roamed from western Europe, across the Eurasian continent and into Alaska. It now only lives in areas of the dry steppes and semi deserts of Mongolia, Kazakhstan, and Kalmykia.

The Saiga is a very curious looking animal. Most remarkable about it is its huge nose. This inflatable, humped, and movable nose looks very similar to the noses of tapirs or dik-diks, and makes the head look unusually large, and bulging. The Saiga's nose is actually an adaptation to the extremely cold and dusty environment in which it lives. Its internal structure is composed of an intricate network bones, hairs, and mucous-secreting glands. During summer migrations it helps filter out dust kicked up by the herd and cools the animals blood. During the winter it heats up the frigid air before it is taken into the lungs, thereby reducing heat loss in its body. The Saiga's large eyes are set at the end of bony knobs on either side of its head, giving it a bug-eyed look. Their eyesight is keen, and they can see up to .6 miles away.

The short, round body, which can reach from 3.8 to 4.8 feet in length, is supported by thin legs. They are, however, very good runners and can run up to 48 mph for short periods. They stand 2 to 2.6 feet high at the shoulders. The short tail is 2.4 to 5.2 inches in length. Saigas can weigh from 46 to 112 lbs. The females are slightly smaller and don't have the male's horns. These wax-colored horns are almost translucent, and are tapered, heavily ridged, and very sharp. They can grow 10 inches long.

The Saiga has a woolly undercoat and an outercoat of coarse, bristly hairs which protect it from the cold environment it lives in. In the summer it has a cinnamon-buff coat which is rather thin compared to their winter coats. Their winter coat is almost entirely white and twice as long, and 70% thicker than their summer coat. The hair under its neck tends to be longer. The hair on their legs stays short.

Saigas are harem breeders and breed in late November to late December. Males will herd together a group of about 12 females, and mark a breeding territory. While defending it against other males, fierce fights break out. Sometimes they end in the death of one of the saiga males. Huge amounts of energy are spent defending territories, and because of the extreme winters, 97% of the sexually mature males will not survive.

Those males that do survive start off on their spring migration in April, forming herds of 10 to 2,000 animals. The females in the meantime collect in large herds to an appropriate breeding area, where they give birth to one or two calves each. Eight to ten days after giving birth, they set out northwards after the males. Once at their summer pastures they break up into smaller groups. Large groups form again in the fall, when the southward migration takes them back to the winter grounds.

Gestation in a Saiga lasts 140 days. Young females will usually give birth to a single calf the first year, but then have two calves the following years. Calves are born at the end of March, beginning April, when all the females in a herd drop their calves within a few days of each other. The calves are weaned at 3 to 4 months. Sexual maturity is 8 months for females and 20 months for males. Saigas live for 6 to 10 years.

Saiga antelope are herbivores and eat grasses, prostrate summer cypress, saltworts, sagebrush, and lichens. They are ruminants and will rest to chew their cud after eating in the early morning and late afternoon. Cud is food that is regurgitated and chewed again. This helps the Saiga extract the maximum nutrients from the food they eat. Their natural predators are wolves, and foxes, which prey on newborn calves.

The Saiga's horn has been used in traditional Chinese medicine for centuries. Whole herds were slaughtered for their horns, and the Saiga populations declined rapidly. In the 1980s the Saiga had made a sizable recovery after nearly being driven into extinction earlier in the century. With the breakup of the Soviet Union, illegal trade in Saiga horns is once again on the increase. The Saiga was classified as vulnerable by the IUCN in 1996. An animal is considered vulnerable when it is not critically endangered or endangered but is facing a high risk of extinction in the wild in the near future. It is also listed in the CITES Appendix II. A permit is necessary to trade in Saigas and Saiga parts. Law enforcement, however, is difficult in the areas where Saigas can still be found.

Miner-Gulland, Dr. E.J. "Interactions between the reproductive ecologies of the Saiga antelope and rural livelyhoods in Kazahkstan", http://www.huxley.ic.ac.uk/research/rrag/saigphd.htm, (Nov. 2001)