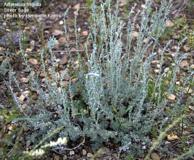 Fringed sagebrush is a woody shrub with silvery leaves and little yellow flowers.

Sagebrush has a strong odor after it rains that smells like turpentine or camphor.

Fringed sagebrush is a low, mat-forming shrub. It gets to be 4 to 16 inches (10-40 cm) in height and rarely grows taller than 24 inches (60 cm). Soft stems grow from a woody base. It has many little leaves that grow from the stem and are finely cut. The leaves have a gray or silvery look to them. Flowers are yellow and very small.

Fringed sagebrush has a unique root system. It adapts to the conditions that it finds itself living in. It grows deep taproots where the water level is low, and lots of surface roots when the water is easy to get at. The adaptable root systems allows fringed sagebrush to to survive drought periods which commonly occur in the Great Plains and the Mongolian steppe.

The sagebrush is used for livestock because it is so high in protein. Many wildlife species like to eat it during spring, fall, and winter but not during the summer. Many bird species use the sagebrush Artemesia tridentata for making nests. Artemisia tridentata is also used for fuel in places where other burnable woody plants can't be grown.

Fringed sagebrush can live in many places, but not in alkaline soil. It grows on dry open sites in the foothills, mountains, and plains from Mexico northward to Canada and Alaska, and into Eurasia. Fringed sagebrush grows especially in the high, cold plains of the United States, Canada, and Mongolia. This makes Sagebrush a steppe plant because it can grows in dry and cold climates.