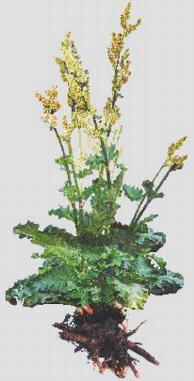 Rhubarb is a member of the sorrel family, and grows in the wild in western and northwestern provinces of China. It is grown commercially in much of Europe and the United States. The name rhubarb comes from the Medieval Latin reubarbarum, literally meaning barbarian rhubarb. It is part of the Asian buckwheat family. Rhubarb originally came from the steppes of Asia over 2000 years ago. There it was used as medicine. Its roots were ground up and used as a purgative, or an old version of ex-lax. Rhubarb didn't give people the stomach cramps of other purgatives and soon became a favorite in western countries as well.

Rhubarb is a perennial plant with large fleshy roots and large leaves with long, thick stems. The plant grows to be about 2 to 3 feet under cultivation, but doesn't grow over 1 foot in the wild. It likes climates where the spring is wet and cool.

The stems are harvested in the early spring. Only the stems of rhubarb are used in cooking because the leaves are very poisonous. It is used by many to make deserts, like strawberry-rhubarb pie. The different colors of the plant's stem can range from green to pink to rose to ruby red. The darker red stalks have a milder, sweeter flavor than the green. Rhubarb is very rich in vitamin C and dietary fibers.