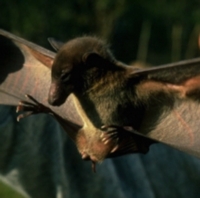 The Dawn Bat is a small Southeast Asian rainforest bat which lives in the mangrove and lowland forests of Malaysia, Indonesia and Borneo. Its unique and special place in the rainforest ecosystem has only been recently discovered.

Dawn Bats have long and slender snouts which give them a dog-like appearance. Their ears are small and pointed and their eyes are round and small. The fur on the dawn bat's back is dark brown and lighter on their underside. Males have a ruff, or fur collar around their neck, which is a little darker in color then their head and chest hair. Females only have sparse hairs around their necks. The tongue of a Dawn Bat is long and can be thrust forward into flowers, while brush-like projections allow it to pick up pollen and nectar.

The male dawn bat is larger than the female. They weigh from 55 to 82 grams while females weigh 35 to 78 grams. Dawn Bats are 8.5 to 12.5 cm long from head to tail. They either have a very small tail or none at all. Their forearm length is 6 to 8 cm long. The genus Eonycteris doesn't have a claw on their index finger like most other bats.

Female Dawn Bats reach sexual maturity after one year while males become sexually mature in two years. Females can have babies at any time of the year. Gestation is a little longer than 6 months, sometimes as long as 200 days. Usually one pup is born at a time. It attaches itself to a nipple and holds on for 4 to 6 weeks. After that time it starts to take little practice flights of its own. They aren't completely weaned until after 3 months.

Dawn Bats roost in limestone caves found in Malaysia and the Indonesian archipelago. Small groups of several dozen will roost in small shelters, while tens of thousands can inhabit larger caves. Dawn Bats are nocturnal and emerge from their caves at dusk to feed on pollen and nectar of night blooming plants. Their favorite flowers are from the Mangrove Apple (Sonneratia alba) and the Durian (Durio zibethinus). The flowers of the durian tree are large and waxy and only bloom at night. As the Dawn Bat hangs onto the flower and pushes its nose deep inside to lick the nectar, pollen covers its face and chest. They are the main pollinators of these two trees and very important to their survival.

Peaches, bananas, avocados, kapok, hemp and latex are some other plants which depend on bats for pollination. In Southeast Asia some of the largest caves with bat colonies are being destroyed by limestone quarrying. Mangrove swamps, home to the Mangrove Apple, are being filled in for development, destroying one of the Dawn Bat's main food supplies. Bats have been accused of spreading disease and destroying commercial fruit crops. However, Dawn Bats prefer ripe and strong-smelling fruit. Commercial fruit is picked green for shipping and is therefore rarely damaged by these bats.

Very little is known about the importance of bats and how forests depend on them for their survival. But it is known that they are one of the main pollinators and seed dispersers for many tropical plants. Bats often make up more than half of the mammal species in a rainforest ecosystem and most species of bats have not been studied.

Although Dawn Bats are being killed by the thousands, they are not on the CITES or IUCN list as a vulnerable or protected species. Malaysia has a Wildlife Protection Ordinance (Amendment 76). However, Dawn Bats can be killed if they pose a threat to crops or property. Since many still think they are fruit pests, the ordinance does little to protect them. People need to become more educated about the Dawn Bat to understand how important they and other bats are to the forests and crops.