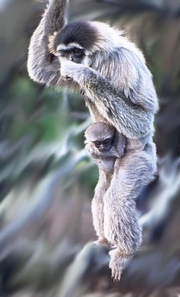 High in the treetops of the scattered remains of the island of Java's rainforests, a silvery gibbon female sings a morning song before she and her family move off to spend the day foraging for fruit. Her hauntingly plaintive song can be heard over a distance of almost one mile (1500 m).

The great call has a specific sequence, with short notes at the beginning and end, and longer notes in the middle. She may only sing the great call, or break off the call in different places, or stretch out parts of the sequence. Runs of pure notes are contained in all songs and many calls. A song about will last about seven minutes. Although the great call is similar throughout the silvery gibbon's region, variations occur with different individuals, allowing females and their territories to be recognized. Only the female silvery gibbon sings. (http://www.gibbons.de is a great site to hear gibbons sing.)

Silvery gibbons have small, stable territories of about 42 acres (17 ha) and the female will sing her song bout several times during the day to declare their territory. She will climb to the top of one of several singing trees to give her great call. The male of the mated pair will sit quietly, scanning the surrounding forest for intruders, while a sub-adult female may join her mother in a softer, high-pitched voice. Strangers, hearing the great call of the resident female, hurry off in the opposite direction. If spotted, it is the resident male's duty to chase them off with a great show of crashing branches and incessant loud single screams.

The silvery gibbons are small apes, weighing 13 pounds (6 kg), have no tail, and are known as Lesser Apes. They have long arms and fingers, and lean bodies which are specially adapted to swing below the branches suspended by their arms. They hook their fingers over a branch, not grabbing it, and sometimes make long swings and let go of the branches entirely. Their dense, silver-grey fur is quite long, giving them a fluffy look. Both males and females have the same coloring. A white or light grey fringe surrounds their rather dark face, and both have a dark gray to black cap.

Hylobates means "dweller in the trees" . Silvery gibbons spend most of their lives in the tree tops. They prefer the dense and close canopy of undisturbed primary forest. Their diet consists mainly of fruit, although it will also eat flowers and young leaves. They need a wide variety of tree species which will fruit at different times of the year to support them. They spend their day on the move, foraging through their territory, sometimes stopping to eat at a tree with fruit. They move quietly through the canopy, the only sign that they are there is a moving branch or a piece of falling fruit.

Silvery gibbons, like most gibbon species, are monogamous. They live in small family groups of mated pairs and several sub-adult offspring. Of all the apes, only singing primates are monogamous. Territories of neighboring groups overlap at their borders and are defended by the great calls of the females and the aggressive charges of the male. Groups will not contest the common zone unless both groups arrive at a fruiting tree at the same time. The offspring will not join in, but will watch intently as their parents call and scream, and crash through the tree tops.

There is no breeding season and a female will come into estrus at any time of the year. The gestation period is 7 - 8 months after which a single young is usually born. The infant is hairless with only some fluff on its head. It is kept close to its mother for warmth and nursed for about a year. There are 2 - 3 years between births. Several juveniles are usually part of a family. The mature offspring will leave the family to find its own territory, or be driven away by its parents.

The silvery gibbons only live in the scattered remains of rainforest on the western side of the Indonesian island of Java. They are listed on the IUCN "Red List of Threatened Animals" as critically endangered, and have a 50% or better chance of going extinct in the next 10 years. Habitat loss, hunting and capture of infants for the pet trade have contributed heavily to the silvery gibbon's decline.

The silvery gibbon occupies a specialized niche in the forest canopy. They need the continuous canopy of a primary forest to move around in since they don't travel on the forest floor. The foliage needs to be thick, with horizontal growth to allow for the gibbon's brachiated form of movement. The silvery gibbons also need a wide variety of tree species which bear fruit at different times of the year, since its diet consists mainly of fruit. Secondary forests, or new growth forests have gaps in the canopy, and the growth is sparse, which restricts the gibbon's ability to move around. There is also less of a variety of fruiting trees in new growth forest, which can't support the dietary needs of the silvery gibbon. Silvery gibbons are not found in mangrove rainforest, or above 4,800 feet (1600 m) above sea level.

Java is one of the most heavily human populated islands of Indonesia and primary rainforest are rapidly disappearing. Only 4% of the silvery gibbon's habitat remains. Except for Gunung Halimun National Park, which can support a population of 1,000 gibbons or more, the remaining population is discontinuous and exists in small isolated remnants which can't support a viable gene pool. Fewer than 2,000 wild silvery gibbons remain. Of the 33 silvery gibbons held in zoos around the world, only 6 breeding pairs are having offspring. It has been recommended that the Indonesian zoos become more involved in breeding programs to ensure a long-term survival of the silvery gibbon.

Although Indonesia has laws protecting the silvery gibbon, they are not strictly enforced, and silvery gibbons continue to be killed for meat, sport and the pet trade. Logging and farming are claiming the last of the primal rainforest which are the silvery gibbon's last hold out. Money is being raised to build a Javan Gibbon Rescue and Rehabilitation Center. The project would place donated or confiscated silvery gibbons in a program that would rescue, rehabilitate, breed and possibly reintroduce them to the wild.