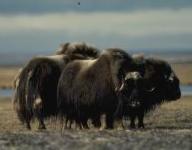 The musk ox live in the frozen tundra of northern, Alaska, Canada, Ellesmere Island, Greenland, Norway, Sweden and Siberia. No other hoofed animal lives as far north as the musk ox.

The musk ox can live in the harsh conditions of the arctic tundra because its 24" long hair and woolly undercoat ward off frost andprovide insulation. It has a sturdy build. It looks like a huge dust mop on hooves, their long hair reaching almost to the ground. Its muzzle is usually white. It can weigh from 396-880 pounds, and reach a length of 7 feet. The musk ox gets its name from the odor produced by glands beneath the bull's eyes. The male has thick horns that almost meet on top of its head in what is called a "boss". The horns curve down besides its face and out at the ends. The female has smaller horns, without a boss. Instead the top of her head is covered with whitish hair.

In the summer the musk ox herd has about 10 members. They will use the almost constant daylight to stuff themselves on plants. They need to put on enough fat to get them through the long winter. In winter the herd can have about 15 to 20 members. They will head out to higher ground where the fierce Arctic winds blow the snow off the ground. Here they will feed on crowberry, bearberry, and willow. The herd only travels about 50 miles between its summer and winter feeding areas.

Breeding season starts in July and goes on until the end of August. Each herd has a dominant male, or bull, who will try to keep other bulls from mating with the females. The female will give birth to one calf the following April through June. The calf can graze in about a week but keeps suckling for another year. The lifespan of a musk ox is about 24 years.

Muskoxen coexisted with the mastodons and mammoths and have survived early hunters and climate changes that caused the extinction of other species. The musk ox doesn't have many predators. Polar bears can sometimes kill weak or injured oxen. The Arctic wolf is the only serious predator.

Musk ox form a defensive formation when threatened. They will first run to a higher location, then turn and stand shoulder-to-shoulder in a circle. With their heads lowered, they form an impenetrable wall. The young are protected in the center of the circle. Musk oxen stampede easily and sometimes young calves become separated from the herd and are lost.

The musk ox's defense is useless against bullets, and they became easy targets for humans. They were almost hunted to extinction for their fur and their meat. By the early 20th century the population had become depleted. In 1917 the Canadian government gave them protection and now there are about 90,000 musk ox in that country.

More ominous as far as the decline of the musk ox is concerned are the effects global warming has had on their breeding. In the past few years, as a result of warmer climates, the coastal plains used as calving grounds have had more snow, and as a result, a later thaw. Musk oxen have moved to the foothills to find forage and often give birth there, making them and their calves more vulnerable to grizzly bears.

The Inpiaq speaking Eskimos of the Northern Slope of Alaska call the musk ox "Oomingmak", which means "animal with skin like a beard".