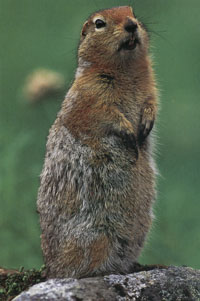 The arctic ground squirrels predators are grizzly bears, hawks, owls, falcons, eagles and ermine. They benefit from the tundra environment of tall grass meadows because their small size, and the color of their fur allows them to hide. Another benefit of the tundra vegetation allows them to store enough seeds, grasses, leaves, etc. to survive the harsh winters. Finally the lack of trees allows them to spot predators and alarm the colony.

"Tundra: The Not So Barren Land
http://www.ucmp.berkeley.edu/glossary/glos5/biome/tundra.html#arctic
(2/9/03).